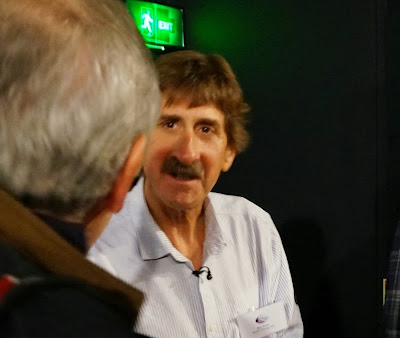 What with the America's Cup (which keeps on foiling) and laptop woes (grr!) a week has passed since the Southampton Boat Show and I've not blogged a word, which is a shame as it was rather interesting.

First up there was a talk by sailing legend Skip Novak, Whitbread skipper and high latitude sailor. It was organised by the World Cruising Club as part of the World ARC's South American round the Horn route preparation.

So there were a number of anxious looking faces concentrating on preparing their yachts, some of which sounded like standard plastic production line models, for one of the more extreme cruising destinations.

There was lots of good advice about keeping things simple: this is not the destination for those that like an-all electric life, and GPS driven chart plotters, for here, like Greenland, they'll as likely as not put you on land (one yacht was reportedly up to 7 miles inland).

Instead equip the foredeck of your boat with two drums with 150m of cable each for shore lines, with another two at the stern, and of course that all important garden hoe.

Why a garden hoe? Well apparently it is ideal for cutting the kelp from the anchor. And on the subject of anchors the basic rule was go heavy, which I can certainly believe, in waters where 40 - 50 knot winds are normal.

When winds can be expected to become gale like quickly it becomes important to be able to react, and so he prefers adding a 4th reef rather using storm jibs etc because it is all rigged and ready to go.

This is somewhere you don't want things to go wrong. But of course they do - so I asked about engine failure, for a lot of the talk was about its importance and they take 2,800 - 6,800 litres of fuel, depending upon boat. "You manage" he replied, summing up the self-reliance that sailors in these waters must have.

There was some good stuff about life jackets, and how they are less important than harnesses (don't fall in being a very good motto), the difficulties of getting parts delivered to Ushuaia (easier to sail to the Falkland Islands and pick it up there), and mussels (potentially lethal apparently).

He showed us some good photos of the scenery, which around Cape Horn looked pretty impressive (even if not quite East Greenland) while South Georgia and Antarctica looked simply stunning, though harder to get to.

A fascinating talk about a destination that often seems more myth than real, from someone who's spent years sailing those dark cold stormy waters.

There's more in this month's Yachting World which has just started a new series of articles about heavy weather sailing from none other than Skip Novak.

And no Mommy boats. Impressive.

Nope, though the Chilean Navy is on hand for emergencies.