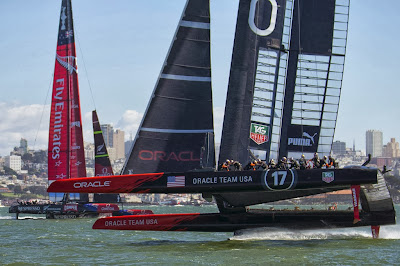 So the fat lady has sung, the flags have been waved and magnum sized bottles of champagne sprayed over journalists, for the 34th America's Cup has come and gone.

I've been reading the papers and its no doubt that measured in millions of words this AC has been a success. It's helped that there's been some journo friendly angles, such a sporting come-back that even a dry foot landlubber could appreciate, and of course here in the the UK the line that Sir Ben Ainslie basically won it single handed in the tradition of Nelson, Alfred the Great, the little ships of Dunkirk etc etc etc

The other winning aspect has been video clips of 72 foot carbon fibre wing-sails flying at over 50 mph (to use TV friendly units) spray flying as they scream around the course, while their sailors grunt, swear and gesture at the opposition (again, thanks Ben Ainslie).

It was pretty exciting to watch, but often after the race I wondered actually how much of substance there was. In most cases the reason for the result was:


I didn't find much to think about after, though I'd like to have another look at that 180 degree gybe and turn around the lower mark that Oracle did in the final race. I'd also like to know what exactly were the tweaks made to Oracle that made it go so much faster, in particular allow foiling upwind, though so far they've been keeping their secrets close to their chests. [Updated: see Yachting World's take here]

But the run-up was underwhelming given the handful of entrants. This article at Reuters shows the problems: they estimated that it can cost US$ 100 to 200 million to run an America's Cup campaign, which could well be true for Oracle though I doubt plucky little Artemis spent anywhere near that.

Team NZ admitted their spend was around $ 100 million but its generally felt that Oracle spent not just a little more but a lot more - a team of 150, boat builders flown in (from NZ ironically), Olympic gold medallists galore, backup boats on hot standby, development work round the clock... you name it, whatever it took.

And that money paid off, engineering the faster boat and ultimately that's what won the race.

It will be a daunting thought for anyone thinking of entering the next AC, that to win you have to spend as much as the likes of billionaires like Ellison.

Ellison said in the final press conference he wants more entries, but he also wants to win. So which will it be next time round: a level playing field where talent matters more than money or will the desire to retain the cup be too strong?

Of course that is all part of the America's Cup tradition: rich beyond measure quadzillionaires splashing a relatively small part of their total wealth in the pursuit of having that ancient trophy to show off to other quadzillionaires. But it is not an attractive tradition to those new viewers that the organisers and their sponsors so want to attract.

When trying to work out who to support it was a toss up in that I wanted Ben to win but Larry to lose. It was was a tough call, but emotionally I was sad for Team New Zealand, and felt the cup would have been in safer hands with them.

But of course they failed, and it was gutting to watch them at the last news conference.

When Grant Dalton was asked about the future of the Cup he replied that it's not in his hands. He's right, and its not in ours either, its in Larry Ellison's.

It will certainly be interesting to see what the Defenders come up with vis a vis designs for the next go round.

Indeed - according to rumours the challenger of record is another billionaire, namely Bob Oatley, the man behind the Wild Oats series of maxi-yachts.

It's like Formula One, but without the noise. And the track is 'slightly' wider. Fueled by money the best boat ultimately wins, even if the salty underdog gives it their best effort.

Alas money seemed to be the ultimate factor, which is the Achilles heel of the America's Cup.