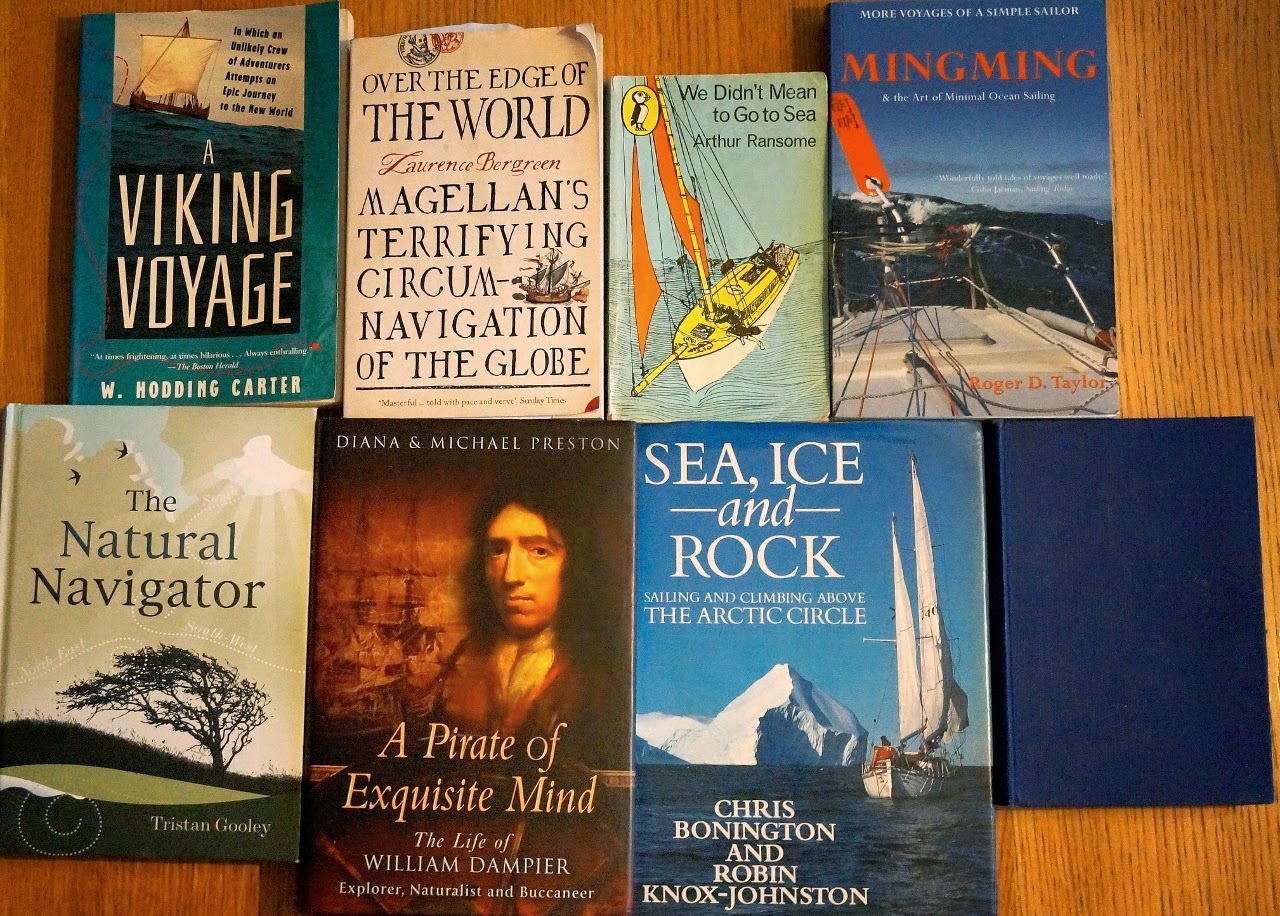 So what are those favourite books and why?

We didn't mean to go to sea by Arthur Ransome. I was talking about this book with a college friend and she said that even now if she starts it she can't stop until the end. The best of the Swallows and Amazons series, a simple clear premise: four children drift out to sea in a small yacht into fog and a storm. Be honest, you already want to know what happens next....

The Natural Navigator by Tristan Gooley. Ok he is a sailing mate but there's another reason for this being on the favourites list. In the era of GPS and chart-plotters you lose something if you spend your sailing time staring at screens. Look out at the world around you and learn from it and your sailing will be the richer for it.

A Pirate of an Exquisite Mind by Diana and Michael Preston. Another confession, William Dampier, the subject of this book, is an alleged relative. But its also a great read about a fascinating man who should be as well known a Captain Cook. I mean as well as being a writer, scientist and explorer he was also a buccaneer and pirate. Triple circumnavigator, he had dinner with Samuel Pepys and stormed the town of Panama with the likes of Bartholomew Sharp - what a life!

Over the Edge of the World by Laurence Bergreen. This history of the first circumnavigation by Magellen really has it all. Death, sex, mutiny, triumph, exploration, discovery, wars, wealth... and crackingly well written too.

Sea, Ice and Rock by Chris Bonington and Robin Knox-Johnston. I read this on my return from Greenland and it describes these two old bearded buffers attempt to climb the Cathedral Peak in that very country. Indeed we anchored in Suhali bay in Robin's own Clipper 60 and were equally amazed by the stunning scenery of Kangerlussuaq fjord. What's most fun is the two experts teaching the other the ropes of their speciality and grumbling that the other is doing it all wrong.

Ming Ming and the art of minimal ocean sailing by Roger D. Taylor. On returning from my double handed sail to the Arctic Circle I read this account of a single handed voyage to destinations even further north. In today's well travelled oceans it seems ever harder for the cruising sailor to stand out and not sound like a tourist brochure but Roger manages to do just that, munching nuts and watching for sea birds as he sails alone up to 80N.

A Viking Voyage by W. Hodding Carter. I took this book to Greenland and found I had to ration chapters it was that good. Farting, beer, whale meat recipes, rudder failure, storms, boredom and icebergs - surely the first Viking crossing to Newfoundland was exactly like this. Like a modern saga but much, much more fun to read.

The Surgeon's Log by J Johnston Abraham (that's the blue book bottom right). Ok this is pushing Elaine Bunting's request that the book still be in print but its a classic that I enjoyed so couldn't help including (though note the attitudes to race are very dated). Its all too easy nowadays to forget Britain's amazing merchant marine history and this gives a glimpse of life in one of the great lines, the Blue Funnel, when it was at its height in 1907, joining the ship's doctor on a voyage East to Japan and back. Pack your starchiest collared shirt, climb up the steamer's gangplank and prepare for a spot of tiffin...


Updated: Dancing on Ice by Jeremy Scott. A recent find about the British Arctic Air Route Expedition to Greenland in 1930 - 31. Young men from Cambridge took their country house lifestyle with them, such as trying to teach the Inuits the steps of the Charleston on the sea ice. But for the lone occupant of the weather station high on the ice pack it was to be a fight for survival...