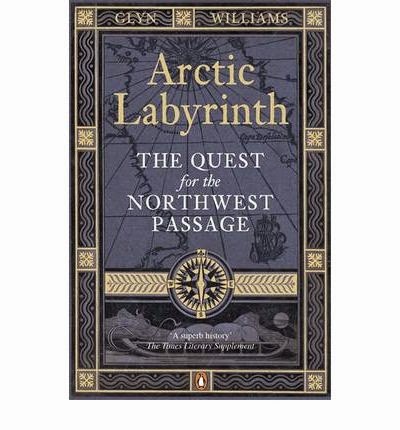 It's the time of year when Tillerman has to dig himself out of his house and here in London we even had a 10 minute flurry of snow (that was gone 10 minutes later).

But what is better when its cold and dark than a book about travelling to where it freezes really hard and long, where ships get locked in ice for years on end and whole expeditions just vanish.

I really, really enjoyed Arctic Labyrinth: The Quest for the Northwest Passage. I've sailed to the Arctic Circle and to Greenland but this is in another league: the European exploration of the high Arctic.

And there were so many expeditions, each discovering just a tiny bit of the sprawls of islands, rocks and channels between what is now Canada and the Pole. They were hunting for a route to far Cathay, but often found just myth or loss.

Step by step each voyage turned the unexplored into charts. Davis Straight and Baffin Bay, then Hudson Strait and Hudson Bay. A long time exploring around its edges, into the heartland, following rivers to lakes and then down again to strange unrecognised shores, the first hints of the eventual Northwest Passage.

Sometimes you got a strong hint as to what each mission would find by the choice of captain, for they were not shy about the cartographers equivalent of the selfie. Which island, for example, do you think Captain Vancouver would find himself sailing to?

Many would end up locked in the ice for winter after winter, but most returned. Of course Franklin and crew famously did not, leaving just a series of grisly clues as to what happened. But they so nearly did find the NW passage, as one reason they were not found was they had gone further than anyone thought possible.

It was to be left Amundsen to finally get through in a small boat and copying Inuit methods, taking twelve sledge dogs with him.

It also reminded me of Arthur Ransome's Winter Holiday, where the Swallows, Amazon's and D's would leave messages in a cache: this practice was apparently common amongst the real polar explorers.

The north beckons many, heading for those empty spaces untouched by modern life. Yet it is due to human driven climate change that those waters are opening up, even to adventurous cruising sailors.

If like me you can't quite see how you can sail away from work long enough for a NW passage try this book.

Curl up somewhere warm and dream of lands cold but wonderful.