Book Review: Round about the Earth by Joyce E. Chaplin 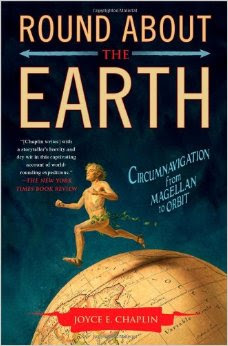 I was initially unsure how much I'd learn from this book: after all, I've read really quite a lot of books about circumnavigators, from Magellan to Dampier by way of the ship's naturalists and Slocum.

But actually it was fascinating, as its a book about something very different: human's relationship to the planet and how that has changed, as perceived by those most aware of it: those that have travelled all the way around it.

The early voyages were into the unknown and full of risks. The planet was found to be larger than many hoped and in the wastes of the Pacific sailors dropped like flies from scurvy. Survival rates of some of the early expeditions went below 10%.

Later voyages by Captain Cook learnt from those failures and ensured his crew ate antiscorbutic sauerkraut and gradually the danger and risk was replaced by confidence. In the stability between 1815 and 1914 westerners from Europe and America could traverse the globe for pleasure and interest.

State backed expeditions were replaced by private individuals. Initially just the very rich, such as the Sir and Lady Brassey's voyage on Sunbeam, but the cost barriers kept coming down and new forms of transport opened up, such as the egalitarian bicycle.

The era of Phileas Fogg style luxury was not to last. In the 20th Century wars and new technology made circumnavigations much less glamorous, packed like sardines into aircraft emitting CO2 gasses that harm the planet.

The ultimate circumnavigators are the astronauts, looping the planet every ninety something minutes. But they face new dangers of radiation, vacuum and zero-gravity with no chance of recuperation on some idyllic desert island on their way.

And our circumnavigations are also virtual: robots circling this and other planets, beaming their messages back to the home world.

But ultimately all eyes remain on this, our Earth. Like the astronauts peering down from the space station, our fascination with this planet never ends.

An excellent book, a good read full of interesting ideas.