Book Review: Casting Off & Untie the Lines by Emma Bamford 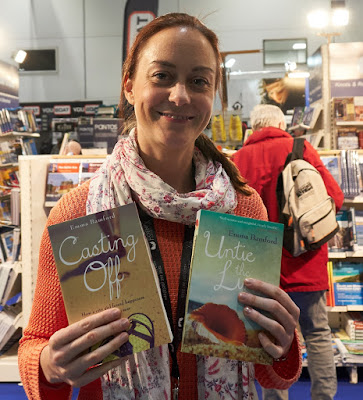 There's more than one way to get that wow! moment in a sailing story.

A traditional example would be Race 4 of the 2003 America's Cup when New Zealand were dismasted, but equally memorable to me was when Josje announced she was leaving SV Delos.

So you don't need an epic-challenge at the heart of book - or indeed pair of books - about sailing to make it readable. It can also be how to decide between two alternative, conflicting paths. Or indeed that most fundamental of questions: what is life all about?

Emma Bamford's two books tell of her conflicting urges between working and living in London and the lure of a cruising lifestyle, sailing blue waters amongst deserted islands.

Of course the dream of cruising as a life of leisure is just that, with the reality one of hard work to get boats seaworthy and savings being drained. One of the impressive things about the Delos crew is how they knuckle down on boat work and have the skills to do a host of repairs themselves.

But one of the downsides to the cruising life Emma would encounter were long months stuck in anchorages while repairs seem to go backwards. Then those idyllic imagined Caribbean islands often turned out to be overrun with cruise ships or quiet enough to drive you crazy.

However London can be a pretty tough place, particularly if you have a job that leaves neither time or energy for anything else - in her case as newly promoted editor of the Independent's "i".

So how to balance out these two alternative lives? Emma tries one then the other (in the first book), then the second follows on directly with two more trials on life on land or water. The writing, from a trained and experienced journalist, flows nicely and is clear and honest about what she was experiencing, the good and the bad.

As you can imagine, the story of a fellow Londoner struggling between the pull of the big smoke and crystal seas was one I could relate to. Its not a "sail into the sunset" story and yet avoids the "tears before bed-time" emotional dramatics of Two in a Boat.

I certainly enjoyed "Casting Off" and "Untie the Lines" -  indeed I read both books back-to-back, finishing in under a week.

Highly recommended for anyone with sail-away urges.

thanks for the review, JP, I'll look for them at my library (or maybe just Amazon).

I've just updated the post with links to the amazon web site pages for the two books - well actually the amazon.co.uk site but that should help you get re-directed to the US one.

thanks JP. "untie the lines" isn't even in print yet for another week (at least here in the US)!