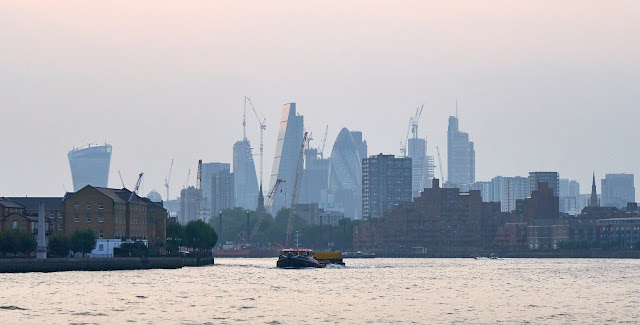 An earlier post described one of the main working boats of the Thames, namely the sailing barges. There used be hundreds of these and other craft thick upon the waters.

Now they have almost all gone, but there are still some working boats on the river. One of the main tasks is to take rubbish from the centre out to incinerators and dumps down the estuary.

One of these is shown in the photo above, part of the Cory fleet, heading downriver as seen from Canary Wharf.

But it is a rare sight, unlike that of a crane in central London, an uncountable forest stretching to the skies building the tower blocks of the future.

Random fact of the day: for a time Blue Funnel's parent Ocean owned the Cory fleet as part of an ultimately failed attempt to diversify in response to containerisation.

A rare site, but a few times I've definitely smelt them passing before I saw them!

The river is a lot less busy than in the past but I think these lighters full of rubbish will be here for some time. Their quays have protected status so as long as Londoners fill their garbage bins we'll see them on the Thames.

Its impressive to see the skills of the lightermen manoeuvre these craft around using tide and the pull of a tug's line.

Apparently Cory is up for sale:
https://www.thetimes.co.uk/edition/business/london-s-waste-giant-cory-riverside-energy-up-for-grabs-gndjszfft