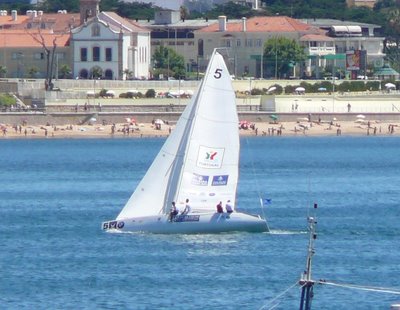 We started at Cascais, which should have been brilliant. Yes, as the pilot book says it is a "fashionable and rather elegant seaside resort". Yes, the eating out is mouth watering, with sea food fresh and charcoal grilled. Yes, Lisbon is a short train journey away. And yes, the wind is pretty much a sure bet, north or north-west 15 - 20 knots for weeks on end.

But, and it's a big but, its a noisy marina. The visitor berths are surrounded by bars where pounding sound systems echo around the austere sea walls till early in the morning. And it was the most expensive we found on our cruise.

However it was chosen to be the host of the first of the World Match racing tour, where Chris Dickson of BMW Oracle Racing won the final with a 3-2 win over Magnus Holmberg in Victory Challenge (above, coming in second once too many times).

It's a good stop-over for a day or two, if you're heading off to the Med or Canaries. But if you want to spend a few days exploring Lisbon and the surrounding countryside- or like us leave a boat there for a few days to swap crews - it would be better to go up the river to the city marinas.

Welcome back. And I was very interested to read about Cascais which is where I plan to be sailing next July.

Thanks and best of luck in the training - I'm very impressed!

Cascais is really nice - you shouldn't have a problem with noise as I think the all the bars are by the marina by plan to keep the town itself quiet.

The sea food really was amazing - recommend the fishermen's cooperative restaurant. But there are many others - I had this melt in the mouth grilled mackeral just round the corner.

As said winds are usually reliable and of good strength, and there's a sheltered bay to race in without too much of those atlantic rollers.

Lisbon is a 30 min train journey away - only a few euros - and well worth a long explore.