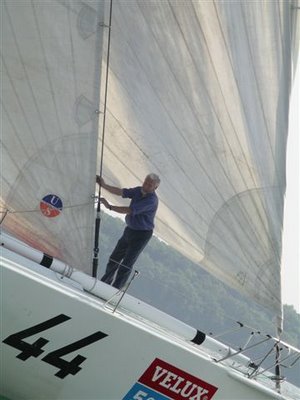 So there have been no posts since June. Yes I’ve been off sailing and been back over a month and ok there’s the slight distraction of trying to move house, but the real reason is its hard work posting several times a week.

Part of the problem is having something interesting to write about. Working full time and living in central there are only limited opportunities to sail. In the dark winter days one can wile away the hours playing navigator using the Volvo Ocean Race boats and a number of weather forecasting sites. I can’t see any point in just reproducing VOR press releases but have tried to create added-value by posting my own comments especially predictions on where the fleet will go and how the yachts will fare.

Not everyone has the same sailing interests. I have no interest in Laser racing like Tillerman – not because there’s anything wrong with that (its sounds brilliant) but I’m more into offshore yacht cruising / racing. But that’s not something that’s easy to do unless you have time and money.

But I can post the some of the experiences of our delivery from to , and soon there’ll be that long promised sail with Emma Richards. Meanwhile to encourage Tillerman aim
for Laser gold here’s proof you can be any age and race professionally.

The picture above is Robin Knox-Johnston on his boat Grey Power, preparing for the Velux Five Oceans. The first man to sail around the world single handed non-stop is off racing again at the ripe old age of 67.

If you want to find out more about this incredible man, read either his gripping autobiography “A world of my own” or the story of the first Golden Globe in “A voyage for madmen”.

What I really like about “A world of my own” are the human touches, such as frequent mentions in his log of drinking the odd bottle of beer or dram of whisky. I just flicked through at random and the sentence “I think I’ll have a nip of Grant’s” jumped off the page. But from what I read of British sailors in the 17th and 18th Centuries, that’s an old, old British sailing tradition. Excuse me, just need to get a re-fill....

Robin Knox-Johnston was born in Putney, London. Which co-incidently is just where Captain JP is trying to move to. Fingers crossed for both of us!