Lisbon to Gibraltar - 8: Through the Straits

While not quite the same as rounding Cape Horn, we were all looking forward to sailing through the Straits of Gibraltar. Its one of those landmark journeys that can only be done on water, Africa to the right, Europe to the left, the Med dead ahead.

And sometimes dead ahead is the wind, with the famous Levante wind blowing hard from the East, threatening a finally of endless tacking to windward. I'd have rather that than what we discovered - which was a dead calm.

So it was a couple of hot slow days motoring along, made worse by the failure of not one but two autohelms. The coast slowly changed, from the built up strip of beaches and villas to the wilds around Cape Trafalgar (below). 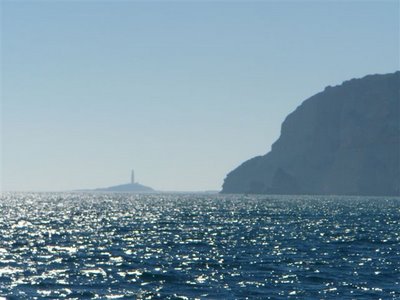 We stopped over before reaching the Straits at Barbate, which we all liked, though it must be admitted we never got to see the town itself. The pilot book warned to keep a good lookout for the tunny nets and boy was that right with mile after mile of nets heading out to sea.

But the tuna those nets caught was unforgettable - melt in the mouth fresh washed down by flaming B52s - as was the sunset on Barbate beach, where the waves played around this sorry wreck of an inflatable (below). 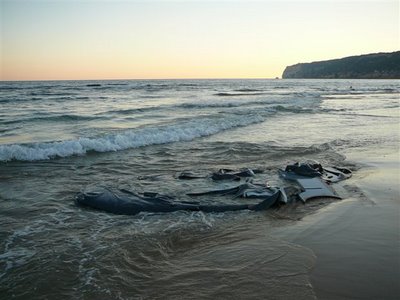 The next day was more of the same as Africa appeared out of the haze that would swallow up and disgorge a never ending flow of tankers. 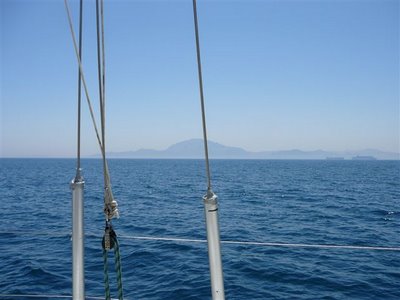 At the rock itself we saw a yacht race have that very familiar floating experience. 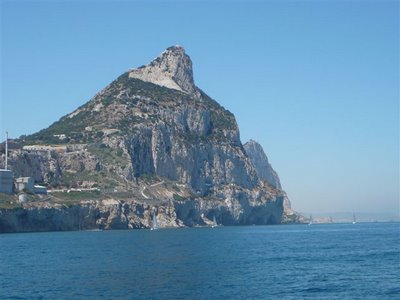 As Gibraltar's marinas were full (with racers) we had to push on to Solo Grande which was just awful - as fake as a film set with none of the glamour. But it had rock star boats and a to-die-for view of the Rock. 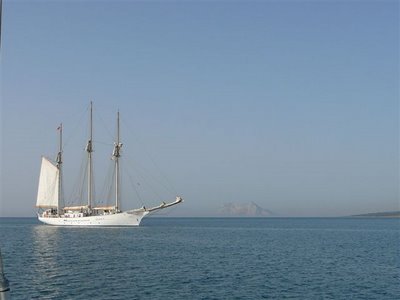