Two Harbours by the Thames 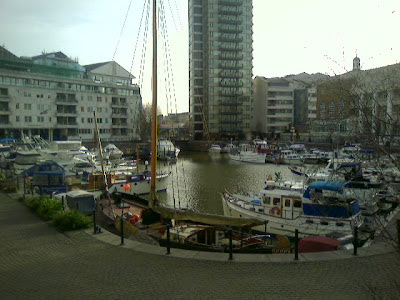 This weekend I was in the Fulham / Chelsea area (talking to a picture restorer) and on the way back I biked through this, one of the poshes locations in London, namely Chelsea Harbour.

It has all mod-cons for the urban elite - shops, restaurants, contemporary apartments, river views, location (just, its slightly away from Chelsea main), and of course a harbour.

While pleasant, it is a bit too clean and well behaved. I have a soft spot for a very different offshoot of the Thames, nearby, on the south rather than north shore. The picture below is where the Wandle River meets the Thames, and you can see on the right some form of platform where in the past barges must have moored. 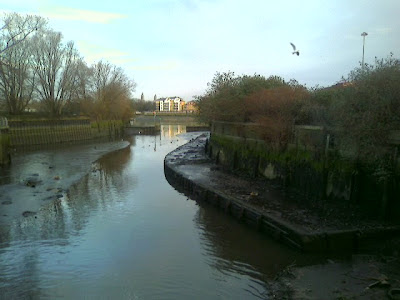 Now it is unused, forever empty. On either side is derelict land where bushes grow, and in the waters the swans swim nonchalantly past discarded traffic cones while coots and herons dive for fish. Everwhere oozes mud and neglect.

I prefer it - it has a romantic wild feeling, a forgotten corner of London, a secret to be discovered.

But for how long? Already the land on one bank is being prepared by developers for more glass and steel apartments.

While I don't have a problem with urban renewal and river aspect living - it would be hard, having benefited from it - it would be a shame if all the Thames's banks were built upon and managed.

It is variety that brings character and interest. And that would come from leaving the Wandle mouth to be an urban wilderness, not another design showcase.
Posted by JP at 7:35 pm