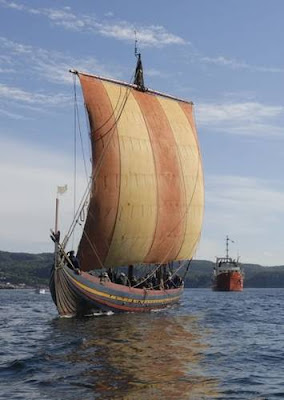 On the 5th January there was a 90 minute program covering the voyage of a reconstructed Viking ship, Sea Stallion, from Denmark across the North Sea, around the top of Scotland, then down the Inner Hebrides to Ireland. The destination was Dublin, a city founded by Vikings many centuries ago.

It was a very cold and wet crossing with very cramped conditions: about a square metre of deck space per crew. The boat wasn't great into the wind - nearest it could get was about 60 degrees - and in trials they found they could get 2 knots rowing into the wind against just 1 knot sailing. You can read about the Sea Stallion here and there's lots of clips from the BBC Timewatch documentary here.

Today there's just been another such program, this time about the history of wreckers around the coast of Britain. From the Scillies, to the Cornwall coast, to the Goodwins Sands, to far north of Scotland, wrecked boats have been plundered in their hundreds if not thousands over the centuries.

The law was often counterproductive: the boat was only considered wrecked if all were dead. Hence it was in the interest of the scavengers to kill - or at least not give much aide - to the survivors.

It was a rather grizzly story of poverty driving crime, completely lacking the gentle humour of Whisky Galore, but still fascinating. More here.
Posted by JP at 8:36 pm

if they're going upwind against a strong current, I could usually take 'em.

Of course being passed by a paddler, even one on a racing surfski, was usually their cue to sigh and "hoist the iron jib".