Iain M. Banks and the search for Utopia 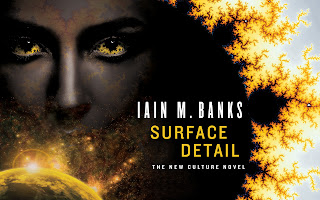 After yesterday's theremin themed post a brief word on the rest of the British Library's Out of this World exhibition.

To be honest I was disappointed: it was trying too hard to show that there is a long tradition in what we now call science fiction and that even "serious" writers dabble in it. That for me is not the point, which is it is a medium that allows the writer to explore ideas. The exhibition did acknowledge that, but without going into depth as to the details of these conflicting ideas and overlooked some of the most important SF books.

It could also be argued that many "serious" writers make a mess of SF as they don't understand the genre, but there is of course the counter example of Iain Banks - or rather his alter-ego, Iain M. Banks, a disguise almost as effective as Clark Kent's.

His utopian Culture series of SF novels are a favourite of mine, and the disappointment of the exhibition was countered by a very interesting discussion on the concept of Utopia between Banks and Gregory Claeys, author of Searching for Utopia.

Claeys gave a rather academic (read mind expanding) summary of his thesis, which was that utopias were really about hope rather than religion, politics etc. I got the feeling the attention of audience, heavily biased towards fans of The Culture, slipped a bit at this point.

But Banks did not disappoint, jumping like one of his stories from idea to idea, not always in a linear way (again like his stories) but always entertaining.

The session was chaired by Francis Spufford who wrote the totally wonderful "The Backroom Boys: the return of the British Boffin" (hurrah huzzah!).

There was a lively discussion, to which yours truly contributed the thesis that there are inevitably disagreements about what would be ideal and the concept of utopia is useful therefore as a mechanism to debate their merits.

Anyhow, a fascinating evening that made up for a mediocre exhibition. There are other talks in the series and the program can be downloaded in PDF form here.
Posted by JP at 9:43 pm