Bathing in the hot springs of Greenland 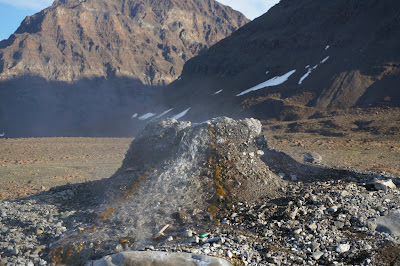 After the polar bear had vanished we returned to our hunt which was to find some of the rumored hot springs of Greenland.

We had rough instructions such as "opposite where the channel entrance meets the fjord" which wasn't that helpful to be honest but after rather a lot of wandering around we found not just one but three hot springs.

The first one we found, all green and mossy, was used by the girls, while us boys held off. However the second was so tempting we couldn't resist.

Our hot spring came bubbling up from what looked like a mini-volcano crater (above). Here it was scalding hot but just below some locals (hunters we guessed) had dammed it to make a pool where the water was just about bearable: 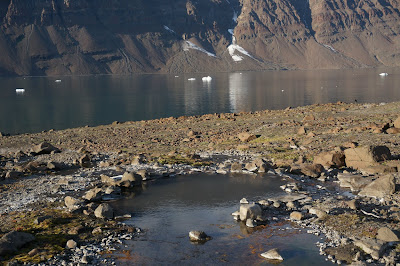 Here we wallowed in male bonding sort of way, looking down at the fjord where ice bergs drifted slowly by, asking hopefully if anyone had brought any cold beers.

So after daring each other to dunk our heads right under, then trying to shake the gravel out from parts where gravel should never go, we headed back to the yacht: 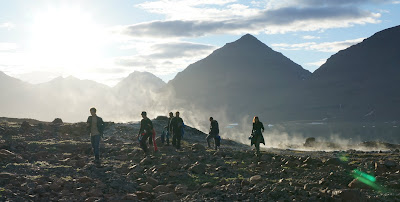