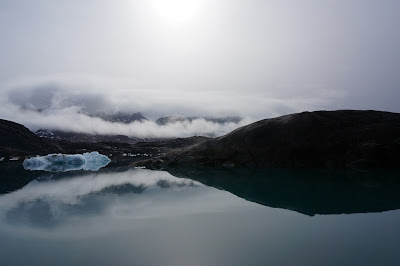 We had been mostly lucky with the weather but on the Wednesday the forecast was for 45 knots of wind with gusts quite a bit higher out at sea.

That was unfortunate as the plan for the day had been to head south, for alas our time in Greenland was coming to an end, but in a way it was fitting.

Greenland can be a hard and unrelenting environment, and the wise traveler adapts to conditions where necessary. Pretty much all the books I'd read of journeys in these lands had times when the only option had been to wait, and so I considered this day another tick on the list of Greenland experiences.

I spent some of it lying in Robin Knox-Johnston's my bunk reading the book "A Viking Voyage" and listening to the rain pounding on the hatch above. 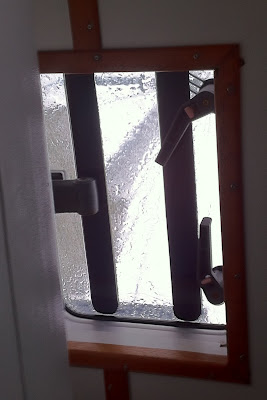 We watched some videos, including the 1934 classic "The Wedding of Palo" - though alas we only got to see the first half so never got to find out who Palo chose of the two rivals for her hand (though have a pretty good idea).

We also saw the beautiful and moving "Iceland: A Skier's Journey" filmed on a trip on Aurora with Siggi - definitely worth a watch.

There was even popcorn, so all in all it was a good day.

Then we had some visitors.....

The final event at our local Hudson River Greenland Festival is a relay race called "The Palo". It's named after that movie. There are 4 legs, I think it is - one is a sprint, one is a "seal tow" with one team member playing the role of the dead seal, I think there's a backwards leg and then the last leg is the Palo's Wedding leg, where you bring the bride home on the back of your kayak!

Thanks Bonnie, a very appropriate theme to have for a Greenland Festival!

Have you seen the film?