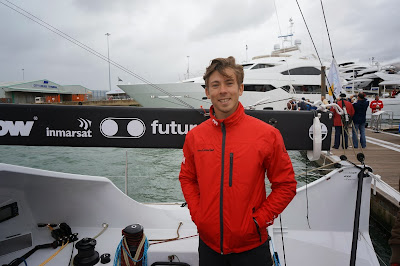 Another of the boats that caught my eye at the Southampton Boat Show was the new Class 40 Concise 8.

Very slick looking its to be sailed by the double handed team of Ned Collier Wakefield (above) and Sam Goodchild.

They had success last year coming first in the Normandy Channel Race and hope to repeat that when they enter the Transat Jacques Vabre starting in just two weeks time.

Longer term they admit in this video of the naming ceremony for Concise 8 of their desire to race in the Vendee Globe.

So its a shame they can't sail together in the Vendee Globe rather than be competitors.

I agree with you on single-handed distant racing, I think. It verges, (to a degree) on stunting, and less on quality racing. I have the utmost respect for solo sailing. I have always wanted to do it. But the best sailing, the safest racing, is crewed.

Indeed, respect to the single handed racer but its not something I'd want to do.