The ship's biscuit - one year on 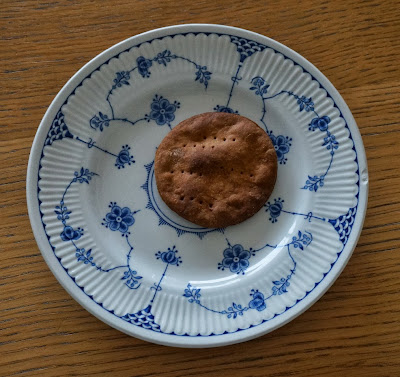 A year ago, inspired by the Great British Bake Off (GBBO), I used one of the classic recipes to bake some ship's biscuits.

I wasn't that impressed, describing them as "the texture of teak decking tasting burnt". Unsurprisingly there were many left over and I saved my friends and relatives the pain of having to taste them.

But not all were thrown away, some were stored in my cupboard and I've been trying one every now and then to see how they endure.

And today, just over a year from their baking, I tried another one. And how was it? No worse, but then again, no better either.

Still as tough as decking, dry and tasting burnt, but still edible, just.

If after a year's sailing your tall ship was somewhere in the middle of the Pacific you might not enjoy your ration of biscuits, but you wouldn't stave.

So I guess that counts as a successful recipe.

Here's a picture of a ships bisquit. Reportedly it is from 1852. 125 years later it was sent to the danish Maritime Museeum, where it is currently on display.

That's amazing - a ship's biscuit that is 125 years old! Having seen mine not age over one year I can believe it but it's still pretty impressive.