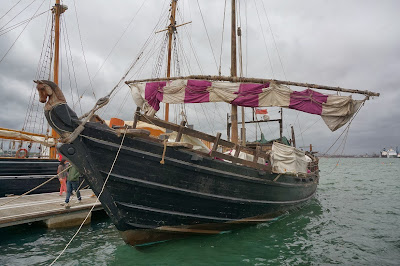 A couple of days ago I reviewed the book "Sailing close to the wind" which described the voyage of the replica Phoencia around Africa.

And here she is at the Southampton Boat Show back in September.

She was fully decked (if that's the word, meaning covered from stern to prow), which didn't seem right for a cargo ship, but maybe the Phoenicians would have changed the layout for such a long voyage.

Don't tell us Red funnel are planning to put her into service to the Isle of Wight crewed by job seekers press ganged by the local council.

Replica? I have to ask if she has an engine? Did the original have an engine?

Good question Doc. The original obviously didn't have an engine and when they set out from Syria the Phoencia didn't either.

However they had problems entering ports without one so at vast expense added one in Port Sudan. So not authentic in another way.