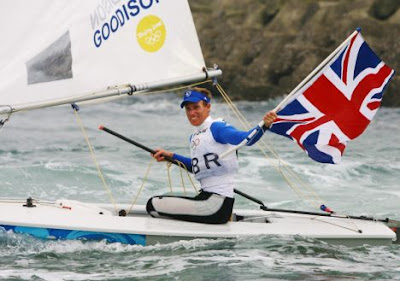 What a great week its been for Team GB at the Olympics! We were pretty amazed to see Great Britain up at third place last Sunday but we're still there and there's just two days to go. So we're likely to end up above Australia, which seems to upset those down under and amused many Poms up here.

And with the sailing done and dusted there's no doubt that again its the Brits who've been ruling the waves and come, sailed, and conquered.

Its been a great feeling and there's no doubt its a huge boost to the London 2012 campaign and wonderful in silencing some of those nay sayers who mutter about the downsides of hosting the next Olympics.

So hurrah and well done to all of the 44 medal winners and feel to join in all you ex-Brits now across the water somewhere, as long as you're still up for Marmite on toast and a pint of London Pride down the Duke's Head (as I'm sure you are).

But sometimes there's this nagging feeling. If only it meant I actually had done something good, rather than just joining the reflected glory. For Paul Goodison's (above) convincing victory in the Laser class doesn't mean I can sail it any better and I'm sure Tillerman would thrash me as much as he would have two weeks ago.

It sometimes seems a bit tribal - sort of "don't mess with us 'cos we're the winners" attitude, the sort of jingoism that is still too common and still sticks in the throat.

But I guess in this era when geopolitics has returned to the great game days of the 19th Century - that turned out to be not so much fun in the years 1914 to 1918 - it's at least welcome that we can compete in a less bloody way.

And our success does have real positive messages behind it - a country that has learnt from past failures and had the cash and will to fund a vigorous, intelligent, focussed campaign. So maybe it can be seen as a reflection of wider success of UK plc.

So hurrah again for our sailors, kayakers, bikers, and rowers - those that have sat on their bums to win Gold, Silver and Bronze for Britain and made us proud!

Here's one sailing, kayaking, biker who has been thrilled to bits over the last 2 weeks.
Posted by JP at 7:27 pm

Totally agree. And of course in "gold medals per head of population" we thrashed USA and China too. Pretty good for the little old island nation.

I will be over to celebrate next week... looking forward to some Marmite and some real beer.

We ought to meet for a drink! Where abouts will you be?