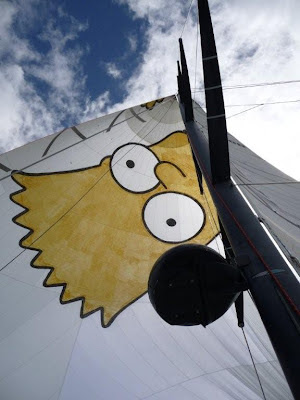 The Volvo 60 Pindar we sailed yesterday was originally called News Corp, and in honour of its most favourite character the big kite had a picture of Bart on it - which has mostly survived down the years.

Spend quite a bit of time looking at it yesterday as one of the cool jobs got to do was trimmer on the downwind legs.

Other jobs were less glamorous - such as the re-packing which took a long time below decks (made interesting by being flung from side to side by a couple of tracks) and involved large quantities of knitting wool!