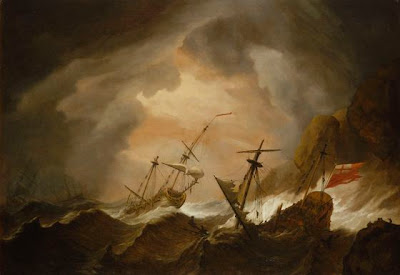 As still recovering from the racing, took today off and went down to the National Maritime Museum at Greenwich for an exhibition called Turmoil and Tranquillity.

The exhibition covers art from The Netherlands between 1550 and 1700 and how they represented the sea. I really enjoyed it - not just the theme was sailing related but its not too large yet had a variety of good pieces.

My favourite was the one above one by Willem van de Velde, the Younger called "Two English Ships Wrecked in a Storm on a Rocky Coast". There were quite a few ship-wrecked-in-storms themed paintings, often with allegorical meanings related to the struggles of life and religious messages.

It was interesting how though painted by artists from The Netherlands, the ships were English. Some of the artists indeed travelled to London and worked in the Queen's House where the pictures are now exhibited and had a major influence on maritime art in Britain.

There were many battle scenes that for some reason didn't grab my attention. But some of the smaller works were gems - like this lovely capture of a squally afternoon: 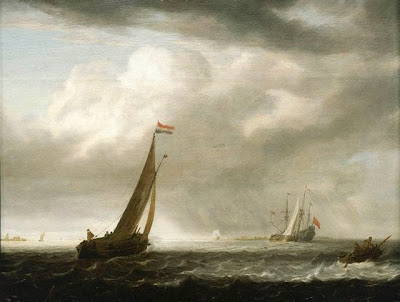 After a walk round the sad sight that is the scaffolding hiding the blackened ruins of the Cutty Sark it was time to go home for a nice cup of tea.
Posted by JP at 4:00 pm