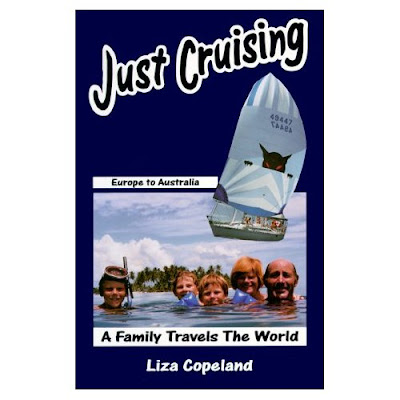 One of the books read while suffering from this winter bug was the wonderful "Just Cruising" by Liza Copeland. Ok, you've already guessed its not going to be a bad review.

Maybe there's something about being stuck indoors in London during a chilly February that makes one dream of sailing off into the sun and warmth of the Med, Caribbean, or Pacific isles.

I picked up the book at the London Boat Show when met Liza and had good chat about sailing in various exotic countries. The book is the story of the first half of the circumnavigation that she and her husband made with her three children, ages 2, 6 and 9 - the bit from the UK to Australia.

It was nice for me that they started their great voyage from old Blighty as of course that's where I'd start. But it wasn't actually that obvious a choice as their family home was in Vancouver, Canada.

From the Solent they headed across the Channel then south before spending almost a year in the Med before joining the Arc and heading across the Atlantic. So it wasn't a rushed trip by any means.

Its wonderful escapism - like the longest holiday that never seems to end. But as they went the kids would study using the British Columbia Correspondence Education Programme.

There must have been hard times too, though a lot of daily life is skipped over given the long period covered by the book. One key skill must be social - to get on with others onboard in the cramped cabin, and to make friends quickly where ever they went (which they did). And there's a village like community amongst those aquatic gypsies that are sailing their way around the world.

One bit I particularly liked was when during the Atlantic crossing they caught dorada (as we did) and killed them by pouring alcohol (e.g. vodka) down their gills (which we did also). After the trip several people said this was a really silly way to kill them (and not the least a waste of vodka) and it was good to see it wasn't just our madness but a good tip from a cruising expert.

The other story that grabbed my attention was the tides around Tahiti which apparently are at a neutral point wrt lunar tides so they only get solar tides which are hence synchronised with the day, so that high tide is always around noon and midnight.

Anyhow really enjoyed the book and recommend it to almost anyone. The only people would not recommend it to are those wondering if they should buy a boat and follow their example as it will only inspire you to start looking for yachts not tomorrow but today.

As for me - I've already ordered from Amazon Liza's second book, "Still Cruising", telling the second half from Australia onwards to complete their circumnavigation.
Posted by JP at 6:40 pm

Thanks, J, put'em both on the reading list. Good timing, too. I was telling Kris night before last that we need to stock up on some more cruising books. :)

You'll love them - get a copy asap and start dreaming :)