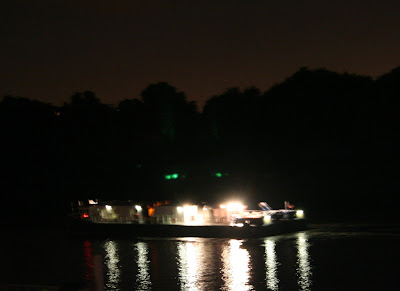 Yesterday it rained and rained and rained. Not just the odd shower, or a little drizzle, but an all day downpour.
And that's not good news for London's elderly water management system that can cope with sewage or rain but not both.
There was rather an unpleasant to watch episode of the documentary series Panorama about it last week. It looked not just in London but across the UK, particularly how it effects the water on popular beaches. There is even a phrase for it - Combined Sewer Overflow or CSO. And in some beaches the wet summer the CSO was so bad that there was a 1 in 7 chance of getting a stomach upset by swimming after heavy rain.
In London there is a special boat called the Bubbler that goes out after a CSO and pumps oxygen into the Thames to counter the way the bugs eating sewage suck all the air out of the water, killing wildlife like fish.
So after yesterdays washout I've been wondering if it would be out on the river again, and yes it has. And what's more its just gone by at past 10 pm (see above) when no doubt the crew is on double pay overtime, so it must be a really bad CSO.
Which brings me to my problem: Thursday is evening paddling day so tomorrow am planning to be out on the water, water that is currently in the midst of a major sewage overflow problem.
Hmmm.......
Posted by JP at 9:27 pm

Some years ago off Manly and Bondi (Sydney, Australia) we used to have to sail through the sewer outfalls when competing in short offshore races. Not pleasant! Fortunately, it's a thing of the past.

Don't splash while you're paddling :-(

You should add 'dodging logs' to your tags for this one.

Here in Albuquerque, the effluent coming out of the city waste-water treatment plant is actually cleaner than the water in the river at that point, so the river is in better condition just downstream of the outlet. The Rio Grande's big problem is non-point-specific pollution, such as agricultural runoff.

We've got that around here too and things can get pretty disgusting.

Mostly we all just stay rightside up when it's been raining too much.

One of the Sebago Canoe Club bloggers went through a phase where he was slapping up every article he could find (and he was looking hard) about the problem. I think if you do a word cloud you still get "sewage" "fecal" and "coliform" as some of the top words. Fortunately I think somebody finally convinced him either that simply reposting other people's articles is lazy blogging, or that maintaining the Big Blog o' Sewage was not quite the way to get people interested in our club, or both.

"dodging logs"? Eeeeeww, yuck (made me laugh, though!)

Keeping upright and not splashing was definitely my policy tonight, but there's always a bit of spray you can't do anything about.

Bonnie.. you will be pleased to know that your club still is the #1 site on Google for searches on canoe sewage overflow.

I'm starting my new blog next week and was wondering what to write about.

But look at all of these comments! I'll just write about sewage and fecal matter - can't miss!

Folks in the Pacific Northwest / Inside Passage don't sail at night because of logs -- but at least those logs don't stink, even if they can sink a boat.

Maybe should give you the topic of "sewage" as a blog launch present!

Luckily the only logs saw yesterday were the wood ones, but not big enough to damage the kayak. Almost got run down by a rowing eight though.

Go for it O'Docker. As far as I can see the "sewage for boaters" blog niche is entirely open, in spite of that brave attempt my Sebago Canoe Club to capture that market. I can imagine that you would attract all kinds of advertisers. Go for it.

Thanks T-Man and JP. I think I may already have an advantage here. I'd guess many of the hapless bloggers whose comments pages I've been despoiling would describe what I've been leaving there as fecal matter.

And speaking of rivers, JP, isn't it about time to be reminding bloggers about the upcoming World Rivers Day? If for no other reason, on the outside chance that people considering starting up new blogs might already have prepared appropriate posts?

Yes, must post an update on the River Day... but tomorrow!