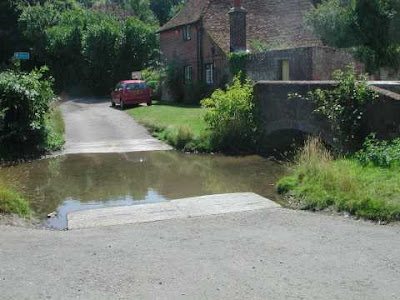 The Nailbourne is a very little river but it played a very big part of my childhood.
I was lucky enough to grow up in one of the small villages of Kent that have been at the foot of the chalk hills for over a thousand years, and through which flows the small river called the Nailbourne.
Or for some of the time, because the Nailbourne would sometimes dry up, leaving initially some puddles full of struggling minnows until they too went and the river bed would become thick with tall grasses.
There were a number of legends about what this meant, but the generally accepted one that it was a sign of national disaster, and those with left wing views noted it stopped running when Mrs Thatcher was elected.
It was very exciting when it started again, with village gossip about how it had got as far as the next village. And then you'd wake up the next day to have a full flow of a foot deep water rushing by.
Of course we kids treated it as our playground, paddling, swimming, and making dams. It wasn't really navigatable for adults but we made a number of rafts. An old tin bath proved to be very unstable, almost always resulting in a dunking, but a lorry tyre inner-tube with plank roped on top proved very reliable, and the basis of many a "Swallows and Amazons" style expedition.
As the Nailbourne flowed through the Kentish villages it was crossed by pedestrian bridges but cars just had to ford it (see pictures). This of course was great fun on a bike, though it occasionally got very slippery leading to a number of accidents.
One glorious summer day a police car tried to go through the river when particularly high and got stuck, and had to be pushed out so it could dry out. We thought that very amusing!
We were little water rats and there were indeed real water rats in the river. I remember one swim between my legs, though a friend freaked at that point and jumped out of the water.
I'm sure its no co-incidence that now I kayak and sail, and live again in sight of a river, and though the Thames is indeed a mighty river, the little Nailbourne is as special to me. 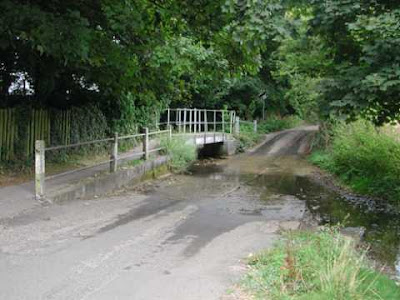 ps ....and if anyone asks about the date of this post - its using Australian time!
Posted by JP at 3:10 pm

I've heard of faces that would stop a clock, but stop a river? The British press can be so cruel.

And wouldn't the first photo be more accurately captioned:

The Nailbourne, at flood stage.

I should have known better.

Loved what you wrote about the Nailbourne river, was thrilled to learn about World Rivers Day and am resolved to do something for the River Stour in Canterbury on 26 September 2010.
Jan