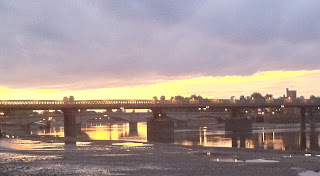 Comedian David Williams is attempting to swim 140 miles down the River Thames from Lechlade in Gloucestershire to Big Ben in London to raise money for charity.

It is not going well, with the actor from Little Britain (to be honest not one of my favourite shows) suffering from "severe vomiting and diarrhoea". Apparently he swallowed something while swimming that disagreed within him.

Oh dear, not exactly the five star water quality we hope for, and this is before he gets to the tidal Thames (as above, at Putney) which receives millions of tons of sewage a year.

Someone should warn him that a pair of Thames Bubblers have been patrolling the waters today doing their fzzzzzzz!!!! routine as they squirt oxygen into the water.

But its for a good cause: David Williams has raised £ 350,000 for sports aid so far and has just reached Berkshire.
Posted by JP at 8:44 pm

here's a picture of the recent water testing

Ho ho! I wonder what they were doing in that pic - why would the police sample the Thames?

Anyhow, here are a pair of pictures as part of a highly scientific analysis of Thames water quality.