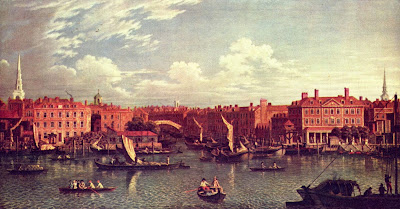 For World Rivers Day here's a picture of one of London's lost river, the River Fleet, which gave its name to Fleet Street and hence Britain's press that used to be based there.

According to The Lost Rivers of London by Nicholas Barton Lord Nelson used to stay with his uncle in Kentish Town that was on the banks of the river "in order to keep an eye on the Fleet".

In earlier days it was even grander: Wren and Hooke created an elegant canal, as seen in the picture above.

Indeed the further back you go back the wider the river seems to have been. In Roman times it was big enough for major ships and possibly had a tidal mill.

Now it is just a drain, part of London's sewage system. Eric Newby described how "at the lowest level the Fleet itself raced riverwards at a good ten knots, too strong to stand up on a dry day, down a tunnel more than fourteen feet high". When it rains its like a torrent of water and sewage that overflows into the Thames at Blackfriars.

Eric Newby also describes a conversation with one of those that work down there that say the strangest thing they found in those underground tunnels was an iron bedstead!

An inglorious end for a river with a rich history.
Posted by JP at 7:46 pm

I suppose it's not completely surprising that the roots of London's tabloid newspapers are closely associated with raw sewage.