The London Stones and the Thames 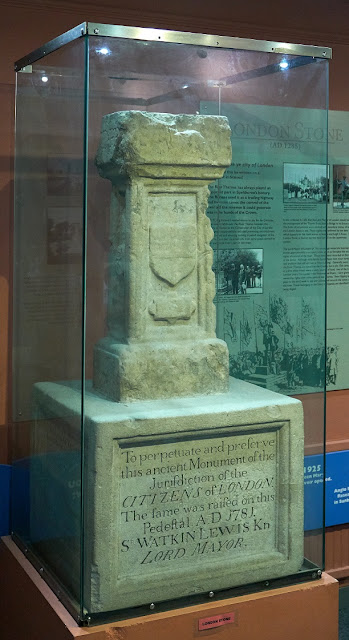 So how much of the Thames is London's?

That of course raises an important question: what definition of London should be used? The Londonist has a fantastic video that discusses all sorts of alternatives, including post codes, the London boroughs, the M25, the 020 phone area code, the tube or maybe out to zone 6 of the tube and train network.

But these don't work for the Thames, as it doesn't have a phone or tube stations at either end of the London Thames.

One possible answer is the scope of the Port of London Authority (PLA), which according to Wikipedia is from the "obelisk just downstream of Teddington Lock (the upstream limit of the tidal river) to the end of the Kent/Essex strait of the North Sea (between Margate to the south and Gunfleet Lighthouse, near Frinton-on-Sea, to the north".

The trouble with that is the PLA, however important, is not London, and Margate most definitely is not part of London. The Thames Police remit is from Hampton Court to the Queen Elisabeth Bridge, and that sounds closer to what I'd consider the London bit of the Thames, though maybe it should be a bit wider.

There is an older definition that works even in today's London, using the ancient London Stones (not to be confused with The London Stone). These were defined in times gone by as the limits of jurisdiction of the City of London. To quote Wikipedia:

In 1197 King Richard I, in need of money to finance his involvement in the Third Crusade, sold the rights over the lower reaches of the River Thames to the City of London. Marker stones were erected to indicate the limit of the City's rights

These are then:
These points are shown on the Google Earth map below and I think they work today too.

I'll come back to these London Stones in future blog posts, but until then its time for another quiz, in
the next post....

Interesting stuff JP. Recent legislation in my pets has given rights to walk the beaches and/or waterline on most any lake around here, even if private property exists along the way.

New developments along the Thames (such as near Vauxhall) almost always give space for the Thames path right by the river but there's no retrospective option as large parts are private property with gardens going down to the river. So the path has to head away from the river for quite large chunks which is a shame but I guess understandable. There is also controversy about navigation rights vs. fishing rights on some rivers that stops kayakers from using them.

Wait, so kayaks are even restricted access? That seems ever more bizarre. I can understand the old private gardens along the river not being given over to public use, but if you're on the actual water, I would have thought you could paddle just about anywhere (obviously staying clear of shipping lanes, etc).

It's complicated - probably relates to the sale of fishing rights in very old times indeed. See this link:
https://www.britishcanoeing.org.uk/guidance-resources/waterways-environment/access/waterway-access-and-the-law/