In early 1953 a storm out of the North Sea drove the sea up the Thames estuary towards the capital. A storm tide, low pressure and high tide, overwhelmed London's defences and water poured onto the streets.

It was a wake up call and the response was the magnificent Thames Barrier (above), formally opened by the Queen in May 1984. A series of radial gates can be rotated into position to halt the waters and protect the city's gleaming towers and vulnerable tube tunnels.

Once a month there is a test in which all gates are raised and once a year an open day (also part of Totally Thames) when you can talk to staff, so I went along.

When I arrived all but one of the gates were in the up position but as I watched the final one, D span, started to rotate: 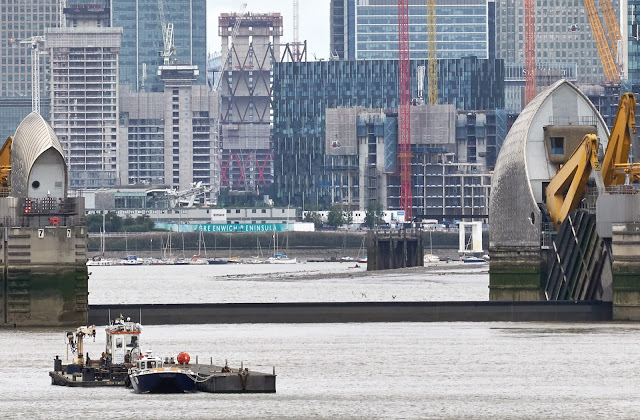 Within a few minutes it joined the others to a full raised barrier, stretching the 520 metres from bank to bank:

Each of the four main gates are over 20 metres high and, with counterweights, weigh about 3,700 tonnes.

The visitors centre gave further information, such as a moving cut-away model that showed inner workings. It also reveals some hidden features of the barrier - such as how the gates can be rotated beyond 90 degrees to create an underspill that allows the water flow to remove silt and avoid its build-up.

Most of the structure is purely functional, to ensure that there is as near as possible 100% availability, with back-up power supplies and in-house repair workshops.

But the silver arched roofs on the piers are not just functional but also architecturally elegant. They are self-cleaning and are built in a similar way to cathedrals.

A remarkable structure, which alas due to global warming, is increasing being called upon to protect London.

Lots of studies on doing that here in NYC but no action yet...

I imagine the engineering challenge for NY is greater - but then maybe the storm risk (e.g. Sandy) is also higher