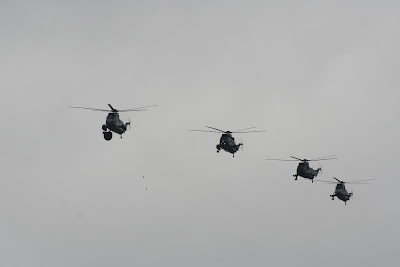 Today was the 100th anniversary of the British Navy aviation, which was commemorated by a visit of HMS Illustrious (Lusty to her friends) to the capitol, and a fly by of helicopters and fixed wing aircraft.

The Sea Harrier was not permitted to join the fun and games on the grounds that if its single engine cut out it would crash into London (which would spoil the day for many).

But a parade of 17 helicopters flew by the carrier and then headed across London following the course of the Thames upriver.

As luck would have it I was working at home and wondering what on earth that racket was outside was amazed so see them go by in a long snaky line.

The pilots followed the river closely, and it was incredible to see how much the line of 'copters wiggled from side to side. At one point I was sure they had given up and headed off to base, but no, the river really is that far from a straight line.

Alas didn't manage to take any photos as was too open mouthed and exchanging excited "did you see that!" with neighbours, but later some of them came back down and caught the four above.

There's been some nostalgic stories on TV of the historic days of maritime aviation, when now elderly pilots flew fragile biplanes out across the cold Atlantic to attack the Bismark.