Putney to Kingston and back by bike

Last weekend decided not to risk the broken toe with either kayaking or sailing as just knew that at one point I'd put some weight on it to avoid (say) tipping upside down in the Thames.

So instead decided to bike along the Thames path, heading off from Putney upriver aiming to get to Kingston before heading back.

Just past Barnes the path narrows considerably, with wall on one side and the river of course on the other. And it was here that met two police horses and riders: 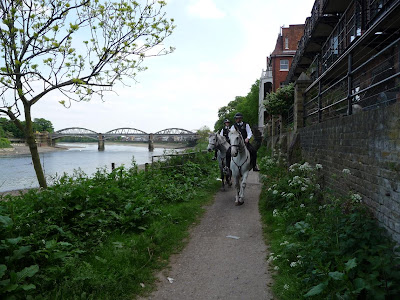 "How nice" you probably think, and they were, as they let me go pass. But one of the horses was less so, as heard the policeman tell the policewoman that his was "a bit crotchety" that day.

They were by no means the only traffic on the Thames path that day. It was in a word chocker - endless streams of bikers and walkers battling it out for space. 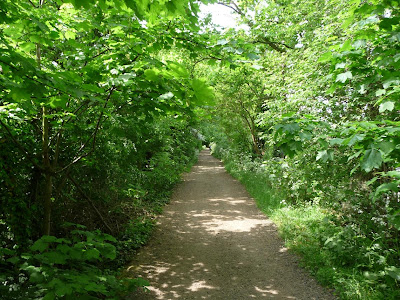 Ok, it wasn't packed all the way along. This bit was just beyond Kew Gardens and could get a bit of speed up. But usually had to go slowly ringing my bell clearly.

It was particularly busy at Richmond, where saw this boat being built using traditional methods. Its a copy of a 12th century vessel carrying 22 people and will be used in a film, which will have to keep my eye out for. 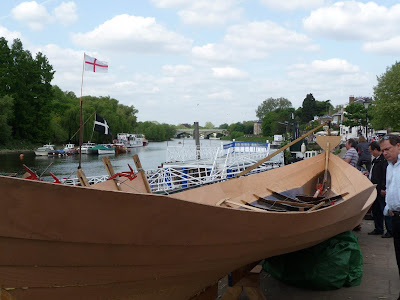 Richmond was rather posh - even their canoe club was clearly very upmarket and had an awesome array of kayaks on display in a lovely brick building with wooden doors, very unlike our container with couple of racks on either side.

At Teddington, where locks signal the real start of the non-tidal Thames, began to wonder how much further it was, so stopped to check how far had to go on using the iPhone's Google Maps and GPS. Not far to go now! 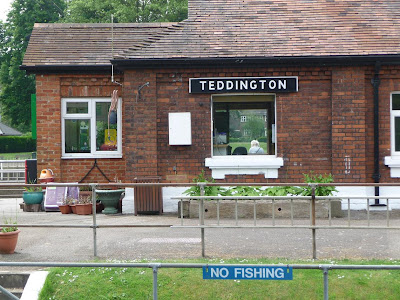 Finally arrived at Kingston, where stopped for a refreshing ice cream (dark chocolate Magnum) before heading back. 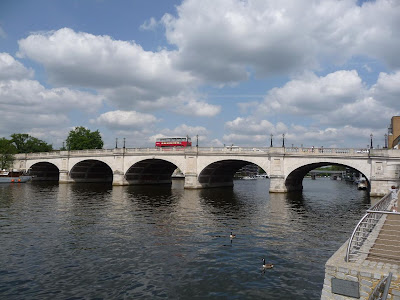 All the way there and back the river was busy with boats of all sizes, types, and shapes. Just messing about.......

I will get back on the water soon - grrr that toe of mine. 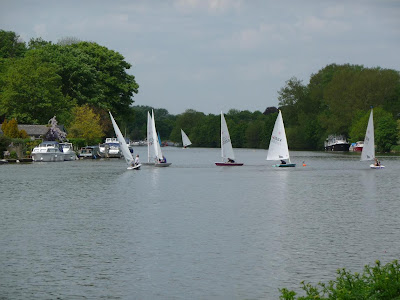 I was already really enjoying your story and then you went and made my day by ending it with a picture of Lasers. Looks like they are racing. Any idea what club that is?

This brought back so many happy memories. When I lived in Putney one of my favorite things was to do that exact route. The thing I remember most was how you cycle for miles through wild countryside on one side a bustling river on the other and then burst into Kingston. You could go for miles without seeing a soul then be in the middle of a suburban city. It brought home what a great place London (OK Surrey) is.

I need a pint of Youngs and a packet of Kettle chips. sniff sniff

Thought you'd like the Lasers, Tillerman. I'm pretty sure they were racing and they are from the Ariel Sailing Club:

Not much can be seen from their web site but the post code of TW11 9QY matches their location.

Adam: isn't it amazing and wonderful that pretty much the entire way there and back (~ 25 miles) felt like was in rural England.