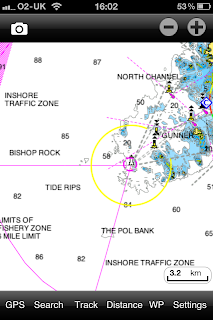 They say you lean from your mistakes: well here's where I learnt something about navigation.

It was on the return leg of the Fastnet, which as you might know means you go outside the Scilly Isles. I was navigating and sometime very early in the morning, out in the Celtic Sea, I set a waypoint off Bishops Rock (see chart above), a little bit off to give a safety margin, but not too much to extend our route.

So next day as we counted down the miles to that waypoint I notice that the boats that had been next to us were either further inshore or offshore, and either way had gained on us. With a sinking feeling I checked the tides and was rather horrified to find I'd sent us directly headed into the strongest part of the stream. We were maybe a knot or two slower over the ground than the competition.

There was nothing for it but to 'fess up and suggest we bear in towards the shore.

I should have known better but I had been tired, and the brain doesn't work well without sleep. It starts to switch over to automatic and it turned out my internal auto-pilot had missed a key logic block. It had done what was necessary for a safe passage, but not a fast passage.

It was a valuable lesson : navigation is a safety of life skill, and if tiredness in any way limits your ability to correctly navigate then that's a danger to the boat and crew.

It's best to keep practising until navigation can be done on automatic, so that even a tired brain will know what steps to follow.
Posted by JP at 4:32 pm