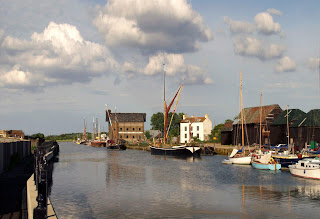 A couple of years ago I blogged on a visit to Standard Quay on Faversham Creek. It was one of those places that oozed character and mud in equal portions, with real Thames Barges being repaired in along banks that have seen traffic probably as far back as the Romans.

So it was with some concern that I read over on Dory Man that there are plans to re-develop it, and in particular change the focus from a working quay to a more tourist friendly site.

I think this would miss the point: the reason why Faversham has character is that it has authenticity. It really is a working yard, and those really are Thames barges that do need work done on them.

If you agree then there is something you can do: add your name to the petition, which can be found here.

JP, that looks like a site with enormous potential.

Just look at all of that empty space between the buildings!

If the locals are having trouble maxing out the taxbase, you should have let me know. California is swarming with developers who would be more than happy to help.

Just look at what a fine job they've done here.

Stand by for an important email from Buff, O'Docker. He's looking for investors in his Faversham Heights mega tower block complex - and you could be part of it!!