Drumming and the Heron 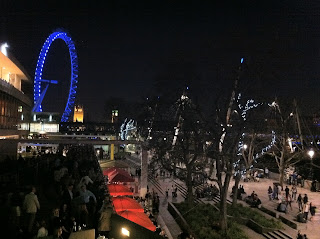 Summer has come to London early.

Tonight I gave myself a treat between work and family commitments, and went the QEH on the South Bank for a performance of Steve Reich's Drumming. It was totally, epically, brilliant.

Drumming is one of the greatest works, if not the greatest, to come out of the minimalist movement, full of hypnotic repetitions and phasing between players, here on drums, marimbas and glockenspiels, plus three vocalists / whistlers / piccolo.

Its tribal music: not from those dancing around open fires on the plains of Africa (though inspired by that), but for the urban tribes - those who live in communities of steel, glass and concrete.

Outside the evening was still warm, t-shirt weather in April, and the space outside the South Bank complex was filled with people while above us turned the London Eye.

On the way home, along a path lit by the moon (ok and also the odd street light), I lingered to watch a heron go fishing, its beak flashing into the dark waters.

I love this city. 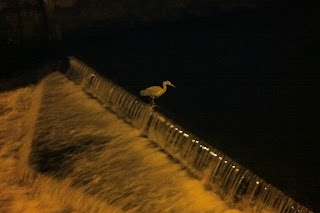