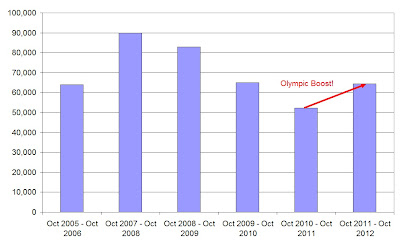 Sport England has just published a study showing that the Olympics did indeed increase participation in sport - by as much as 750,000, as reported here and here.

And you'll be glad to hear that sailing too has received a boost, with weekly participation rates (at least 4 days over last 28 days) up a good 23% on the previous year!! Woo hoo!

The study also published the rates for the last six years which shows a much bigger rise in 2007-8, also a Olympic year, but then a gradual easing off.

I suppose we should be grateful it has at least gone up, but the Olympic boost is less than in 2008 when it involvement increased 40% and the new peak is lower.

So the underlying numbers aren't as good as the headline figures are suggesting.

difficult to believe - the weather's been so horrible this year we hardly did any sailing!!!!

Correlation is no proof of causation.