Top Yacht: ITS THE END OF THE WORLD!! 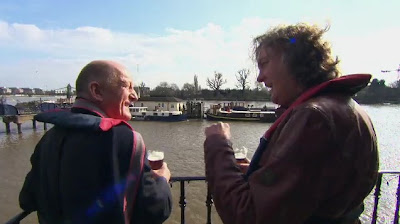 INT: After the section on the dangers of sailing in heavy seas with a spinnaker, its back to the studio:


CLARKSON
Well after that film that showed the exception that proves the rule that MORE POWER is always a good thing, its time for the Top Yacht Review of the Year!

CLARKSON
So what did you get up to May?

MAY
Well in April I went along with my chum Oz Clarke to see the University Boat Race and very pleasant it was too apart from the two swimmers....

CLARKSON
Two? I thought there was just the one.

MAY
Actually there was another. There was this Australian sailing journalist (or so he said) called Buff Staysail that kept hanging around with us and so I asked whether it was possible to swim out to the boats as they went by - on a purely hypothetical basis you understand - and off he went.

CLARKSON
That's strange, because one of my highlights was the Diamond Jubilee and I was in charge of keeping the Duke's hip flask full with Scotland's finest when we were distracted by what can only be described as someone mooning Her Majesty the Queen, and royal protection told me it was an Australian alleged sailing journalist called Buff Staysail.

HAMMOND
You know this is weird, because I was down in Weymouth for the sailing and some chums of mine let me try out the police jet skiis. Everyone was having a great afternoon protecting the racing areas when we were joined by a frankly worse for wear over-weight Australian called Buff Staysail on a pedalo with a worrying interest in female sailors

CLARKSON
There seems to a common theme here.... does anyone know this Buff Staysail?

CLARKSON
Well, would you like to come and join us, Mr Staysail!

Sensation! Buff Staysail on Top Yacht! What on Earth is going on??