Picture puzzle: where, when? 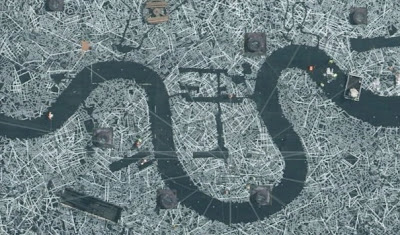 Updated: Tillerman is correct, as can be seen if you zoom out a little bit on Google Earth: 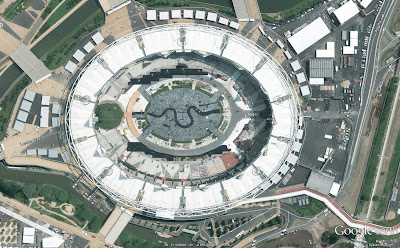 The date on the image is 20th June 2012, a few weeks before the Olympic's opening ceremony that took place on the backdrop of London, identified by the shape of the River Thames.

The graphic was particularly visible during the scene where James Bond and the Queen jumped from the helicopter.
Posted by JP at 2:20 pm

The Thames, they're out of joint.

What's west is north and what's east is south.

Must be in England somewhere. And, fairly recently? It can't be the Grand Canal; the water's too blue.

O'Docker first comment is sort of right: it is the shape of the Thames, in particular the stretch around Docklands and Greenwich. But there is no O2 stadium (among other thing)

Another clue: while it looks like the Thames (deliberately), it is not, though it was in London.

O Docker said...
This comment has been removed by the author.
11:42 am

Cryptic indeed, but yes, it does relate to the beginning of something.

And to the end of that something, too, no?

Very good O'Docker, yes, indeed something did end here too.

What teases you are JP and OD. It's an aerial view of the 2012 Olympic Stadium during the opening ceremony.

Tillerman is correct, saving me from using the O. word again - I sometimes worry that readers might be getting tired of all the "how wonderful it was to be in London in 2012".

Ah well, it will be all over soon (the year I mean, though some say more).