Book Review: Two in a Boat 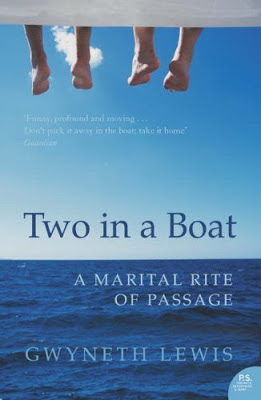 There seemed to be more shouting than sailing in this book.

On paper its the true story of how award winning poet Gwyneth Lewis and her husband decide to sell up and sail away, heading across the Channel and then south to blue waters.

I suppose that is technically correct, but that's not what this book is about, which is men, women, marriage, power, sickness, depression and the whirlwind of emotions and thoughts that go around that: mostly emotions.

It was the anti-thesis to Roger Taylor's Mingming voyages in which he sails to Greenland by himself, breaks a rib, has to come back, all in a couple of seriously major storms, while spending his time wildlife watching and munching nuts.

Gwyneth crosses the Channel and you know there'll be tears before bed time, lots of them, and it doesn't help that she has depression and is often sea-sick while her husband gets truly sick and the engine dies, many times.

You know there are some blogs of couples that sail away and it sounds bliss and you wonder if there's been some paintshopping going on? Well here a grim reality is on display warts and all - a bit too much for my taste to be honest. It felt rather intrusive and at times you felt like the ping-pong ball in battle of "well you moored up badly" vs. "well you rammed that yacht's stern".

I know there are some readers who love all this raw emotion but I found it a bit much.

Then there was the statement such as how the homeopathic anti-seasickness medicine sometimes worked and sometimes it didn't which made me want to shout out "its the placebo effect!" very loudly. Plus there was something about string theory that made me imagine what Sheldon Cooper would say.

The phone call from Ellen McArthur was kinda cool, but apart from that it was not really my thing.