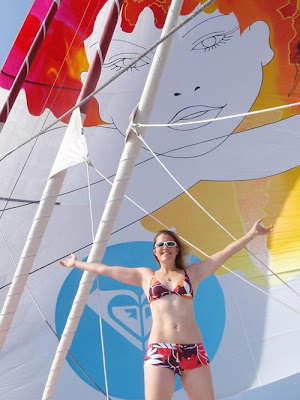 While been busy working and travelling the Vendee Globe has started and joined the Volvo in racing round the world.

Having missed the first leg of the Volvo and initial excitement of the Vendee had a little think about which feel is the more exciting and involving to this armchair sailor this time round.

And the clear winner was the Vendee, and here are ten reasons why:

1. Its a single handed epic adventure, non stop around the world

2. You get to know key sailors as individuals, rather than merged together as a crew

3. The competition includes both men and women (see above)

4. The Open 60 class is the standard for offshore racing

5. It sticks to the traditional route each time

6. It dives into deep southern ocean, iceberg territory like true global races should

7. It's got a better race tracker - in particular it shows wind forecasts. In my mind the Volvo made a big mistake by not continuing the Virtual Spectator from last time. More positive comments about their web site from Adam here.

9. The competitors get to try out their sexy French accents

#10. The Vendee is not named after a car favored by latte-sipping tree-hugging hemp-wearing big-city north-eastern liberal elite types.

Sounds like just the thing for the moose eating "real America" unlike the Vendee which is not just foreign but actually French!

Have another latte and try again, Tillerman.

I can think of a couple of reasons that Sam Davies counts for at least two reasons.

I consider it very important to give a fellow Brit and sailor like Sam Davies 100% of this blog's support and make every effort to ensure she gets the coverage she deserves.

Oh, and according to the race tracker a one "Mike Golding" is doing ok too.