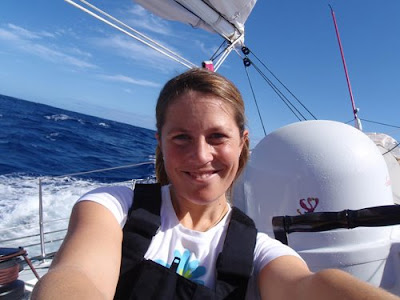 Something very odd happened on Monday. I was chatting on the phone to my sister and she said - unprompted in any way - "Isn't it great about that sailor, you know, what's her name? In that race?

"Sam Davies?" says I (ok, there was some prompting).

But Sam is getting noticed and that can only be a good thing. See this article in The Guardian (which my sister does read) and this on the Yachting World site.

Some good quotes - such as "while they like sailing boats, she loves being at sea" from her boyfriend (sorry chaps).

Of course its a shame about Safran sneaking though along the Brazilian coast, but even so Sam is having a great race.

Though mustn't start counting chickens as its still a long way to home.

Update Saturday: and there's more! Sam Davies PR must be working overdrive. This from The Independent under the title "Bloggin' all over the world", though I'd have replaced the word "over" with "around".
Posted by JP at 9:10 pm

Great articles. Thanks for sharing. There is something special about Samantha Davies. She has a natural good humor and unflappability that reminds me a bit of RKJ in a less crusty way. Her posts on the Vendee site are always upbeat and good-humored in contrast to more labored and gloomy posts from others in the race.

She has a great future ahead of her.

I think RKJ and Sam share an ability to communicate their joy of just being out there, and to be "remarkably normal" as RKJ was described, while doing something amazing.

You're right. They are outgoing, authentic and confident in themselves. There is a great French expression which translates as "comfortable in their skin"