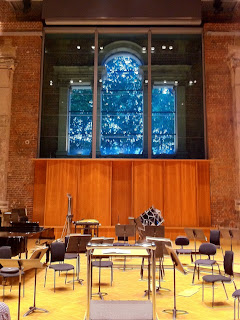 After the earlier trip to the Goldsmith's Hall and the didgeridoo & string quartet concert I looked at the City of London Festival's web site and straight away booked another concert as it included one piece I'd never heard live but have always loved.

It was given by an Aussie chamber orchestra with the rather wonderful name of Ruthless Jabiru. They played some more Sculthorpe, who continues to impress, especially the new work Small Town - Djilile - Shining Island, and ended with Copland's Appalachian Spring, which was a mistake.

Partly because the playing didn't grip me, as if their spirit wasn't quite in it. But mostly because I was still lost in the piece they played before the interval, Samual Barber's haunting Knoxville: Summer of 1915, beautifully sung by Emma Pearson.

Intensely evocative, the words by James Agee are about memory, of childhood, the feeling of safety within a family and all of life being ahead of one. It is about looking back, remembering what is lost, of a time long gone.

One sentence spoke to me, and our family's recent loss:


May God bless my people...
remember them in their time trouble,
and in the hour of their taking away.
Apparently Agee wrote the words to Knoxville: Summer of 1915 after his father died, at a time when Barber's father was dying.

And above the concrete and iron towers was the moon, clear and crisp, gently watching.
Posted by JP at 2:49 pm