London in Black and White 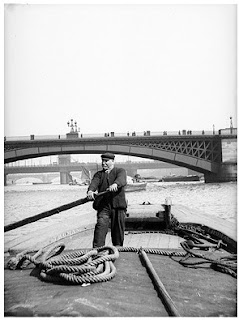 Just found a nice collection of early photographs of London life, including quite a lot images from the river. It's part of an exhibition at the Tower Bridge called "London in Black and White" and you can see a nice selection of them on the Telegraph web site here.

The caption for the picture above is as follows: A flat-bottomed barge or "lighter" going downstream towards Southwark Bridge, circa 1905. These barges, moved along by long oars, were a common sight in London until as late as the 1960"
Posted by JP at 7:53 pm

love finding old pictures of working life, my mum used to tell stories of her Uncle Harold who still sailed on clippers up to the 1930's,walking home bare footed from the docks when he was on leave.

some more examples of London here