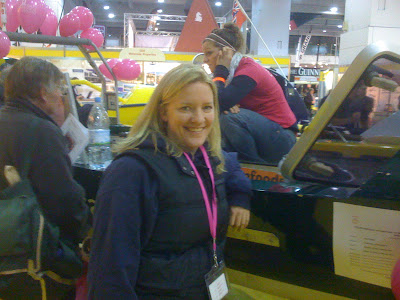 Sometimes its amazing what people make themselves do.

One of the few highlights at the Earls Court Boats-and-some-other-stuff Show was meeting some of the hardy girls who row oceans.

Above is Fiona who as well as being really nice aims to be one of the crew of the first female-crewed boat to row the Indian Ocean. As you can read on their Ocean Angels web site the plan is to row all the way from Western Australia to Mauritius, a distance of 3,100 nautical miles.

The other objective, apart from the record books, is to raise money for Breast Cancer Care. And you can support them via their web site and in return get your picture on the side of their little (under 10m) boat and feel that in a way you too joined them on their crossing.

And as according to that trusted source, The Sun, they will be making at least part of the journey naked, that might be something worth thinking about - and donating to this worthy cause.

The boat they plan to use has a history of female crews, as she was rowed across the Atlantic by Sally of "Sally's Odd at Sea" fame who I met at the last Excel show.

Sally was at the show too, plugging her book and it was great to catch up and hear the latest news (recently married, so all go aaahhh! apart from pirates who can go arrrrr!) 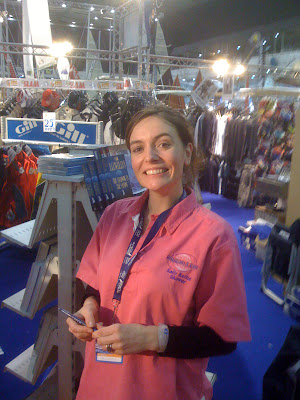 It's kind of a pity that this group feels they need to get attention & support by promising to do part of their journey naked. I see that as shifting the focus away from their achievments and onto their bodies - reinforcing the worn out old concept of woman as an object for voyerism, yet again.

I don't mean to be a wet blanket, but it's a troubling trend among women in sports that they feel that they have to use tactics like that to get publicity.

Its a difficult issue and well worth raising. I don't think they'd have said it if a) it wasn't an accurate description of what they would do when out on the seas and b) it wasn't anything more than words - i.e. no one would actually see anything.

The problem is what they want to do is expensive and it has always been hard to raise funding let alone now. It also is a good cause they are trying to raise money for.

It has other negative impacts in addition to the ones you mentioned.

I feel sorry for the likes of the sailor Mike Golding who gets a lot less coverage than (say) Sam Davies because he is a middle-ish aged man rather than pretty young woman.

The trouble is people are more interested than her than him - whether on a blog or in a newspaper article.

Maybe I should blog an update on Mike's progress to balance the posts.

Thanks so much for your kind remarks and for including us on your blog - it was great to meet you.

Sarah and I rowed the Atlantic last year and did end up rowing naked because of the salt sores and chaffing that accompanies wearing clothes whilst being constantly drenched by salty waves. It was very much done for comfort and pain avoidance rather than any other reason. Given that the conditions will be similar, we will, I am sure, resort to the same for the same reasons.

Whilst I understand your point, Katinka, about it turning the whole thing into something else (as the Sun has done), it was a very small part of our press release which has been picked up on repeatedly. I agree that it shifts the focus away from what we are doing, and I agree that this is a real shame. But at the same time as JP says, we do need publicity to raise such a lot of money for a worthy cause and also to cover our project costs.

I would love for it not to be mentioned and for articles to be written about our adventure without it being the big hook, but sadly in our sensationalist society this doesn't seem to be the case.

Anyway, we would love you to support us and join us on the hull of our boat - one upside of the naked thing is that we seem to have gained a following in the naturist community!

Thanks again for including us, and linking to our website. Hopefully from April you'll be able to see our small dot moving very very slowly across the map!

Thanks for dropping by this blog and adding your perspective on this topic.

It was great to meet you at the boat show and will indeed be keeping watch in April.

I hope the mention here helps you reach your funding goals.

This whole post made me very scared and uncomfortable. HAHA! Just the idea of being on a ROW BOAT in the middle of the ocean blows my mind. The only time I would like to be in that situation is if my large boat sank and I was forced to get into my row boat... Whew! More power to them!

JP, it does sound like a worthy cause that they're raising funding for and as Jolea pointed out, it's extremely impressive that they're making that long journey in a row boat.

I'm also interested in the point made about Sam Davies generally attracting more publicity because she's pretty. I wonder what that phenomenon implies about the sailing community - is it still predominantly a male community / are there still too few women involved in this sport?


Fiona, I'm very sorry - I didn't realise that you row naked for comfort rather than simply to gain extra publicity. It's a shame that the Sun reporter took that piece of trivia and ran with it, but I hope you'll get all the financial support and encouragement that you can. That's a brave endeavour you're embarking on and I wish you and the rest of the crew all the best!

(As an Aussie girl who has had the Slip, Slop, Slap (anti-skin cancer)campaign drummed into her all her life, I hope you guys remember to use lots of sunscreen!! :)

Kat: think she needs a hat - any suggestions?