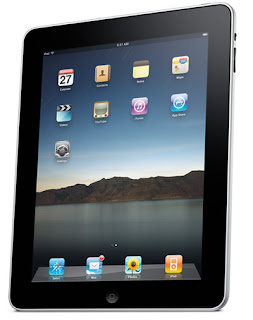 I've had the iPad for just over 2 weeks so it might be time for a post on impressions so far. To sum up: what it does, it does well, but several times have just hit a buffer, which can be very frustrating.

To give a simple example, I was sending an email and then decided it would be nice to attach a picture, only to find out there wasn't an option to do that. I'd have had to copy the text, cancel the message, go to pictures and then select send by email and paste back in the text. Bit of a palaver for what most emails systems do by having a single button that says "Attachments...". But that would require a file system, something that Apple have hidden from us the users.

The iPad shows that is the V1.0 of a new device: great potential but work in progress. And there are many things that are wonderful about it.

Its best features are its large screen with low weight and fast response, including instant-on. If it does what you want to do it will do it quickly and beautifully. So taking it away to visit parents and show photos and then book a hotel online for them it does fantastically. I'm happy carrying it most the time without worrying about weight.

Graphics are great, and its super for consuming content, particularly music, videos, web and articles. I'm not sure about books: I don't think either my eyes or arm muscles would welcome that. But there were examples of magazine or news articles that can be downloaded and look great, including extracts from Yachting Monthly.

There's a RSS reader called Pulse that is so good the NY Times tried to stop it being available, but then the NY Times is a bit of a dinosaur, and I've not included them on my list of feeds. Business types will be interested to hear there is the GotoMeeting online conferencing software plus the FT mobile app rebuilt for the iPad. Yes it is a walled garden but at least you don't have to worry about viruses etc.

The Pages and Numbers apps are ok - I wouldn't want to write a book on them but for quick notes and calculations they are pretty good. Safari, as have posted already, has problem with Google sites like Docs and Blogger for me is very annoying. Again that could be because this is all so new, and ultimately everything will be HTML5 aware, but I would rather use Chrome than Safari.

Something that has defeated me over the weekend was the promised cloud based MobileMe. The idea is great: you can sync your laptop calendar, iPhone and iPad via the web so if you add an event to one all the others know about is. Alas it didn't work, with a lot of all day events being offset an hour i.e. without daylight saving time or duplicated and then sync didn't work so some platforms had two, three or four copies of the same event while others had none. Having serious doubts about MobileMe to be honest, especially as you have to pay extra for it.

But the iPad in general very happy with: it does pretty much what it you think it will do. Web pages load fast and look great, and you can instantly consume content that looks beautiful, pretty much everywhere.

Review of Navionics chart app to come later, and probably further reaction as the key question is still to be answered. After the new purchase thrills have worn off, how often will it actually be used rather than the iPhone or laptop?
Posted by JP at 5:22 pm

Email ThisBlogThis!Share to TwitterShare to FacebookShare to Pinterest
Labels: technology

My first question was if this would replace a laptop for you for most uses and I think you've answered that.

I considered this a few months ago when I got a netbook, but I needed the netbook to remotely administer pc's at work.

But this looks like another quantum leap for Steve Jobs' original vision to deliver computing power to the non-business consumer in the easiest to use package. Instant-on alone probably makes it worthwhile for most people. And I think iOS4 may answer some of your concerns - or does your iPad already have that?

I use the netbook for writing blog posts on the go, so I liked the idea of a real keyboard that's horizontal while the screen is angled and a keyboard that didn't take up space on screen.

Are you using the iPad for blogging or any other extended typing?

I echo this: it is a great review, JP! My initial impression was that the iPad was a step forward for the masses because it is better than TeeVee. But then, just about everything is.

You may have missed this review which was a link from the Panbo marine electronics blog.
It will be good to get you opinions of its use for boating (sail+power+oar&paddle)!
cheers
don

O'Docker: it can't replace a laptop as it need a 'proper computer' to run iTunes to get it going. But it is.a lot better than a net book, or at least my Dell Mini which has been a huge disappointment as it is slow to boot, open 3G or run. It's instant on is a big plus, as is the battery life.

The iPad strength is consuming stuff on the move. If away for a weekend it is great as light and quick, or checking emails in bed or like now surfing the net while watching TV.

No iOS4 for a few months yet: I think another key step is the huge data centre being built in South Carolina which no doubt will make their architecture more cloud based.

I did these comment and the Navionics post on the iPad and it was ok apart from Blogger not working with iOS Safari. More than a few pages and your fingers feel bruised.

Don: thanks for that - great review and wish had downloaded that not the Navionics Mobile Charts. :(