Finding a gun on Beverley Brook 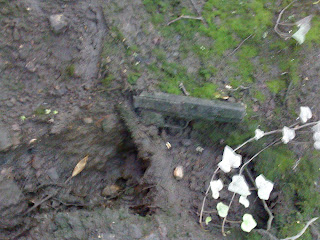 It wasn't really a case of "I couldn't believe my eyes". Rather the brain was having trouble processing what the eyes could see. Those circuits that beaver away without us noticing it, matching things in the world with its database of objects, were confused.

It's just a bar of metal the neurons would fire; no, says others, it's a gun. But there can't be a gun here in this pastoral scene in Putney on a fine summers day, so it must be a metal bar. But it does look awfully like a gun....

For a brief moment the two images, the two interpretations, flickered in my head. Then there could be no doubt: it was a gun. I had found a gun, in Beverley Brook of all places.

It was another of the Thames 21 projects to clean up the waterways of London. I'd volunteered for a similar event earlier this year one weekday on the Thames slightly up river just beyond Hammersmith Bridge. This was smaller scale but a constructive way to spend Sunday morning.

At first it went as expected. We got our waders, gloves and plastic bags, had our safety briefing and then went down to the river. And from the start it was a good haul: the previous Thames had been rather boring junk to be honest, mostly plastic bags and fragments of a carpet.

We found long metal bars, a child's bike and (sorry to say) a used condom. We're were just about to move on further up river when I saw it.

I called the Thames 21 organiser, Judith, who called the police. She's German (do not mention the game) so at first couldn't remember what British emergency services number to call. But then she got through to the police and they promised to send someone along.

So while the rest of the team went off with their plastic bags and wheel barrows full of junk we waited for the bill to turn up, which after a short wait they did. Four in total, including an expert with all the collection gear. One problem was the gun was on other side of the Brook from the path and the river is very muddy, deep thick and clinging mud, the sort that means that welly boots are not enough, you need full leg length waders.

With much laughter one of the policeman put on the Thames 21 gear, leaving behind his official jacket in case he slipped and waded across. Gingerly he picked it up and making sure it was pointed down brought it over and then put it carefully in what looked like a picnic bag. But this was not your average M&S bag: apparently in there it could go off quite happily and not trouble us. It was in fact made with thicker kevlar than the police's vests.

It was a Colt, he thought, it felt heavy, most likely real and loaded. Names were taken and pictures too, as I think the picture of the policeman in those long plastic waders will be on display at the station.

And I learnt that you can indeed find a gun on the pastoral banks of the Beverley Brook on a fine summers morning.
Posted by JP at 5:41 pm

Wow. I mean, one expects these kinds of things to turn up along the Rio Grande ... but a sweet little brook flowing into the Thames ... ?

Surely you must be mistaken. Isn't private handgun ownership for ordinary citizens quite effectively illegal? Therefore, how could such a thing possibly exist? Maybe it's only a movie prop or toy. After all, if such dangerous and non-sporting guns are outlawed, who could possibly own them?

If you had picked up the gun would you have been breaking the law?

Would this be the first British instance of a bank holding up a gun?

Tillerman: apparently in previous gun finds Thames 21 had picked up the weapon and taken it round to the police station.

They had been sternly told off!

Reminds me of a somewhat naive kid from our town in NJ who went off to college and was shocked to discover that drugs were being sold openly on the street corner. So he bought some and took it to the police station to complain.

They booked him for possession.

Somewhat? naive? And supposedly smart enough to go to college?

And yes, bank holding up a gun.
Brilliant as usual