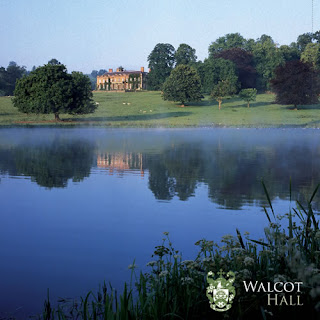 Diversion from boating tales to review a stunning performance of Puccini's Tosca at Walcot Hall (above) this weekend.

This elegant and historic hall was the seat of Clive of India, so linked to some of the bloodier bits of British history. And yet it is as picturesque a spot you could ask for, looking over the rolling hills of Shropshire.

It is for hire for weddings and balls - yup, they really mean old fashioned balls - and the odd musical event. It's a bit like, if you can imagine it, a small scale but rather exclusive Glyndbourne.

The Ballroom can only handle 200 people and so you are within feet of the singers. The scale means you can't have a full pit and stage, but it was ideal for the Opera A La Carte company who did an amazing job given they were constrained to 10 singers and a piano.

Tosca is one of my favourite operas as it combines stunning music with an interesting plot. Many operas have plots that, to be honest, are rubbish: silly or convoluted. I mean, Cosi fan tutte? Anything by Wagner apart from the Meistersingers?

But Tosca, the battle between an oppressive secret police and liberal resistance is distilled into the central battle of wills between Scarpia and the heroine. And on Saturday that conflict was sung full blooded by Cheryl Enever and Paul Keohone - the latter in particular was stunningly menacing even though struggling with laryngitis. He drunk repeatedly from a cup of red liquid: my guess is not wine but Ribena laced with aspirin.

In the interval there was time for a picnic in the beautiful grounds or for some a sit down dinner - and to inspect the other opera goers. And anyone with an antenna tuned for the English class system would have soon twigged that this was a bunch of upper aristos. Blue bloods left and right, Viscounts and other hons (as Nancy Mitford would call them) wearing their DJs ("tuxes" to those across the pond) as if they wear them all the time.

But in the end the blood on stage was red as the drama spun its way relentlessly to its bitter end.

The silliest opera moment I can recall is a Fliegende Hollander that had the cast waving red shirts.

Absolutely mesmerized by the review. JP, I had no idea! Sheep and swans one day, opera in the countryside the next. What's in store for tomorrow?

Pat: I remember a similar wacky Ring with Wotan as a surgeon. When I realised it worked better with my eyes closed I decided not to buy a ticket for the next one!

Tosca's always been one of my favorites too ...

I love the scene where the Spanish Inquisition comes in.