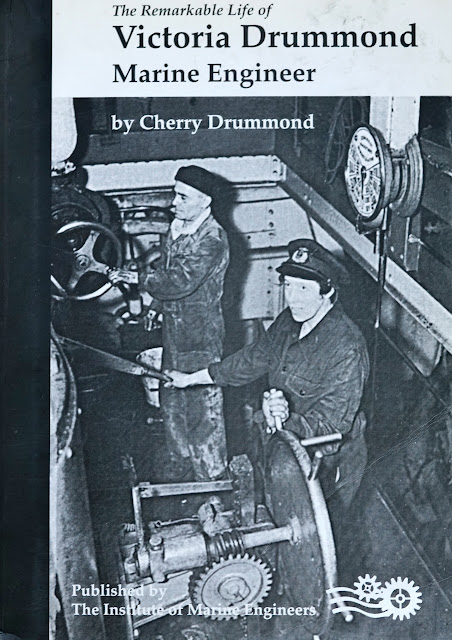 I got "The Remarkable Life of Victoria Drummond, Marine Engineer" to complement my little library of books relating to the Blue Funnel Line and what a joy it turned out to be.

This is the biography of Victoria Drummond written by her niece, Baroness Strange, but based on her writings, so possibly partly autobiographical in nature. It certainly has a wonderful direct voice as if she wrote it herself.

Victoria Drummond was born in 1894 into a very well-to-do family in Scotland - so connected that she had none other than Queen Victoria as a godmother and Prince Albert came to stay (she gave him some rather sticky toffee).

But then came a financial crash when the family lost their money and parent's their positions. The 21 year old Victoria was told by her father she could choose her career and her response was: "I'm going to be a marine engineer"!

The difficulty was that at the time there were no female marine engineers: it was unheard of for Britain in 1915.

Little discouraged, she started in the local garage before moving on to the Caledon shipbuilders. Then she had the stroke of luck, when waiting at Dundee railway station, to meet one of the directors of the Blue Funnel Line who offered her a place after she finished her apprenticeship.

And so she made her way to Liverpool, ending up signing in August 1922 as 10th engineer to the Anchises, sailing to Australia and back several times. Her signature for this voyage can be found in the archives of the Merseyside Maritime Museum, the first British woman to become a marine engineer.

It was the start of a lifetime of voyages, making her way up to finally becoming Chief, fighting discrimination and Nazis on the way. Indeed her bravery in the Second World War, when she kept the engines under full steam while being bombed out in the Atlantic, earned her an MBE.

With her good family connections came opportunities on her voyages. She was invited to dine and dance with the Governor of various British colonies and stay at Biltmore thanks a cousin who had married Cornelia Vanderbilt.

Less glamorous was being in Vienna when Hitler marched in and seeing him drive down the street outside her hotel.

Full of good stories of a rich life, strongly recommended.