The treasure of the Amazon pirates! 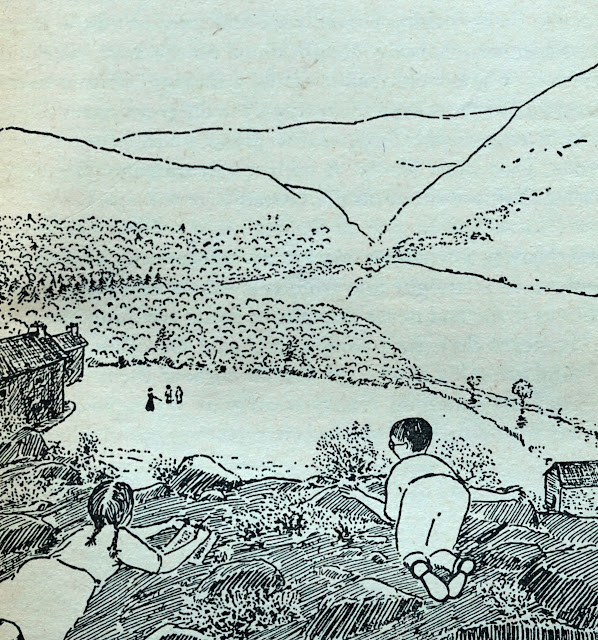 There was always something that puzzled me about the Blacketts aka the family of the Amazon pirates.

The other children's parents had well defined professions, such as naval officer, doctor, lawyer, boat builders etc. but not the Blacketts. There was mum and an uncle, neither of which seemed that worried about money yet never did any real work (if you ignore that book).

And yet they lived at Beckfoot: a four bed detached house (above) where the bedrooms were not squished cupboards but large enough for double beds, drawing room - with piano - dinning room, kitchen and a separate room just as a study. There was a hall, staircase with banisters and landing at the top. Outside there was a lawn too big for them to maintain by themselves, stables and a boathouse.

Then the boathouse wasn't empty but had at least a rowing boat, the Amazon dinghy and a launch described as having seats running round the open front end together with a cabin for tea and steering (and firing arrows from, obviously). Jim Turner also, of course, had his houseboat.

There was also a car and a telephone plus the location gave them river and lake frontage. The lawn was clearly large and half leveled "where once upon a time people had played lawn tennis or croquet" and there was a flagpole and sundial.

Then they had staff: cook, sometimes a housemaid and Billy Lewthwaite to drive the car (and possibly mow the lawn) with bells to summon them. When the Great Aunt (GA) comes to stay they took a horse drawn carriage around the lake. The Amazon pirates themselves went to a public (i.e. private) school.

As if all this expense wasn't enough there were projects: repairing Swallow in Swallowdale, hiring houses during Winter Holiday, decorators during Pigeon Post, new roses and trellis in Picts and Martyrs when Mrs Blackett and Jim Turner were off on a Scandinavian cruise.

Indeed Jim Turner was always off on travels, and not like Ransome because he was a journalist. No, this seemed to be just for fun and destinations included Colombo, Hong Kong, Upper Egypt, San Francisco, Buenos Ayres, Rangoon, Melbourne, New York, Moscow, Khartoum, Ceylon, Shanghai, Zanzibar, the Malays, Java and other places in South America and Africa. He had been a while at Oxford before chucking it before they chucked him.

There was enough capital around for a wild goose chase for gold in South America and when copper was found in the moors above the lake funds to invest in mining them.

So I had a bit of a problem with this new film that seemed to portray the Amazons as non-posh - working class even - for they were arguably the poshest of all the families in S&A.

Where did this money come from? Ok, this is fiction and there isn't any real information to go on so how about looking at the real world, for literary investigators have spotted many connections between the life of Arthur Ransome and the people and places of S&A.