The search for Beckfoot 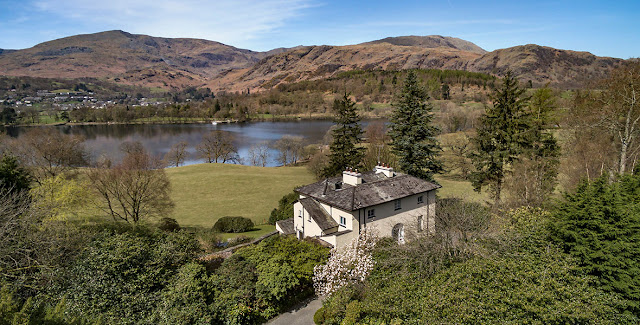 Of course Beckfoot is fictional, a house in a novel. But many of the places in Ransome's books are very closely based on real places, such as Holly Howe, Swallowdale and the secret harbour.

A number of books have been written that try to identify these matches, such as "In search of Swallows & Amazons" by Roger Wardale and there are some good posts by Sophie Neville from her trips to the Lakes plus the original filming.

A number of different identifications have been made for Beckfoot - for example Belle Grange on Windermere looks sort of similar, but then Ransome was more closely connected with Coniston Water.

Roger Wardale highlights Lanehead and Tent Lodge around Coniston Water, and for good reason as it was this lake that Ransome visited when a young child and again as a young man where he met the Collingwood family - a key milestone in his life.

In the early years of the 20th Century the Collingwoods were staying at Lanehead and befriended the young Ransome. The father was an artist with children around Ransome's age and they become close friends - indeed he proposed to two of the daughters. In the boathouse below Lanehead there was a dinghy which they sailed on Coniston Water, teaching Ransome himself, and it was called the Swallow.

So could Lanehead be Beckfoot and the Collingwoods one of the inspirations for the Blacketts?

The Blacketts are likely an amalgam of people, from Ransome himself as Jim Turner and maybe the Collingwoods too, but they were not in any sense rich, unlike the Blacketts. According to an autobiography, their school and university fees were paid for by a "rich friend".

This "rich friend" has been identified as Miss Emma Holt who lived at the nearby Tent Lodge, which is another of the candidates for Beckfoot itself.

There are other connections: it is said that boats used by the Collingwoods were actually those of the Holt family. This would fit into the background of the Liverpool based Holts with multiple shipping lines to their name, include Blue Funnel (Arthur Holt, Emma's uncle) and the Lamport and Holt (George Holt, Emma's father).

They also had a piano (as per Beckfoot) which the Collingwoods would use and it is said that Emma Holt's high fashion outfits were the model for the GA (not the character of course, which was said to be "polite, kind, mild-mannered and generous"). When the Collingwoods ran out of money during the time that they knew Arthur Ransome they stayed with Miss Holt at Tent Lodge and let Lanehead, so Ransome would have known both her and the house.

This certainly sounds like the sort of money the Blacketts would have had: substantial and related to the sea, to inspire the children with all things boating and allow Jim Turner the means to travel the world to his heart's content.

It is of course impossible to say for certain how strong the connection was. Could you argue that if the Amazon's great aunt was a Holt then they were at least part Holts too - especially if there is a connection between the Emma Holt and the red hatted girls that Ransome mentioned as an inspiration? Or only that the generous Emma Holt, in opening Tent Lodge to Ransome's friends, the Collingwoods was just one factor, along with Lanehead, in the mix that became the Blacketts and Beckfoot?

But it could well be that the original Swallow was a Holt boat, and along with the shipping lines the family played its part in the creation of Ransome's great sailing stories.


Note 1: photo above from the web site for Tent Lodge today which looks just lovely and you can apparently hire it for a week or long weekend. The view looks wonderful!

Note 2: there were to be more Ransome - Collingwood connections, as one of the daughters who rejected him would end up having the children that inspired the Walkers.