After rowing to the pole, a rowing race across the Atlantic 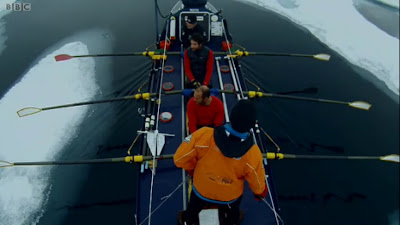 One last post to slip into 2011 with a seasonally chilly feel.

The three men yawn-fest might have disappointed but afterwards the iPlayer suggested I watch a documentary called "Rowing the Arctic" and that was a lot more interesting.

It described the expedition last summer to row to the North Pole, highlighting how global warming has reduced Arctic summer ice cover.

You might remember the route as the one that the Top Gear team followed a few years ago in 4x4s, though they chose to drive in Spring when the ice is at its thickest.

Led by polar veteran Jock Wishart the crew included Mark Beaumont who you might have seen in the TV series The Man who Cycled the Americas.

Now Mark has just announced a new project - to try to beat the record for rowing the Atlantic, and cross in under 30 days. Given it took us on Ocean Wanderer 21 days sailing that seems very ambitious to me.

But then I haven't rowed to the North Pole, though I have just been ice skating again at the Natural History Museum, rather wobbly.

You have to start somewhere.
Posted by JP at 7:06 pm