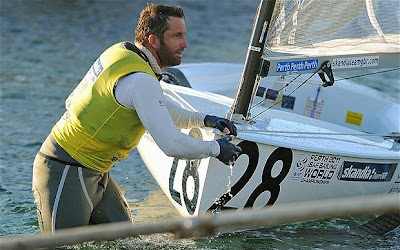 G'day all! Buff Staysail here! Buff by name and Buff by nature!!

Thanks goodness at last those pommie sailors are showing some balls! Way back when ol' Buff was a lad sailors were sailors and had a girl in every port and would drink rum without coke. But the last of the old school were the Whitbread legends, and now its gone all pro like - you know, boring.

It's all training and families, good clean stuff, but not the sort of thing that get headlines. And what happens? Sailing gets a mere paragraph somewhere lost in the back pages. Jeez, journos like me deserve better.

So raise your sailing hat to Ben Ainslie for going mental and getting into an argument with a media boat. Buff says respect, mate!!

Look at those England football players - getting pissed, being caught with tarts, fighting (Arsenal even took on the US Marines), breaking things - and the fans love it!


In - ger - land! In - ger - land!!!
That's why Buff say's good on Ben and his brawl for raising sailing's coverage - BBC, Guardian, Telegraph, trending on Google News and Twitter - its PR gold!

I can hear it now, the sailing fan's chorus: all together now:

I must say I thoroughly disagree with your boorish and unsavory opinions, Mr. Staysail.

The gentlemanly sport of yachting has long revered and upheld a patrician tradition of tight-lipped forbearance towards acts of ignorance or rudeness from members of the lower classes. Please note how your British colleague, Mr. JP, has chosen not to speak on this matter, whatsoever.

I suppose it would not occur to someone from your part of the Commonwealth to realize that the appropriate action for Mr. Ainslie under the circumstances would have been to simply withdraw his invitation to afternoon tea from the offending members of the media.

One is most delighted by your presence on this humble journal.

May we suggest a strict diet of cucumber sandwiches and Earl Grey tea until the young gentleman remembers his manners?

I must say I totally agree with your intelligent and thoughtful opinions, Mr. Staysail.

The sport of yachting has long tolerated a tradition of tight-lipped forbearance towards acts of ignorance and rudeness from drivers of motor boats on dinghy racing courses. I am astonished that your British colleague, Mr. JP, has chosen not to speak on this matter.

I suppose it would not occur to the idiots on the international jury that Mr. Ainslie was sorely provoked by the so-called press boat and that under the circumstances the jury should have banned all occupants of the "press boat" from coming within five miles of this and any future sailing regatta in their lifetimes.

Good on ya, anonymous!

Nice to see a bit of sense around here and less waffle about cucumber sandwiches. When was the last time you saw someone throw a cucumber on the barbie?

Never? - well that proves my point!

Exactly. And when Ben wins his inevitable fourth Olympic gold medal I hope those poms will make him Lord Ainslie of Weymouth. If that tosser Seb Coe can be in the House of Lords, then Ben certainly should be.